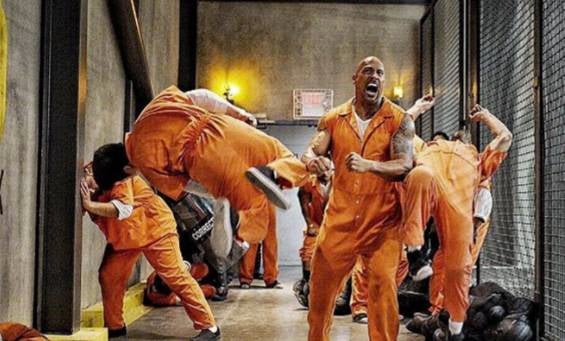 Stopping just short of unveiling the entirety of the upcoming film, Dwayne "The Rock" Johnson has shared some more looks at what's going on on the set of Fast & Furious 8.

With two new videos and a new image, Johnson continues to bring fans as close to the set as they can get without actually being part of the action. The first video, embedded below features Johnson presumably catching a prop grenade and throwing it away just in time to get his Hobbs character blown out of his position but probably not killed.

The next clip isn't quite as action packed unless you consider The Great One's wit and charm to be action, which I'm sure some of you do.

Finally, in an awesome new photo from production, Hobbs is busting out of prison. He's not only taking out the prison guards on his way out, though. The beast and former lawman is holding nothing back from his fellow inmates.

Production is currently underway for the film in far off locales like Iceland and Cuba, as well as domestic locations like Cleveland and Atlanta. No official synopsis has been released for the film, but we do know that Dom Toretto (Vin Diesel), Hobbs and the rest of the Fast and Furious cast will face off against Charlize Theron, who plays a new character called Cipher. Jason Statham's villainous character Deckard Shaw will also appear in the movie.

Fast & Furious 8 will be the first Fast and Furious movie since Tokyo Drift to not star Paul Walker, who passed away last year after a fatal car accident.