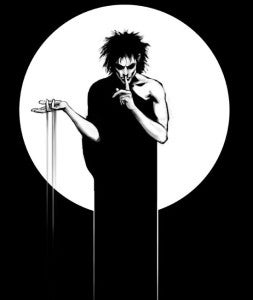 Yesterday, Comicbook.com covered an interview that DC Entertainment Chief Diane Nelson did with The Hollywood Reporter. We specifically noted that it was very interesting that Diane Nelson listed Sandman, Fables, Metal Men, Justice League, and Aquaman as the five DC Comics properties that she would like to see developed into movies. We also pointed out that there had been recent reports of Fables, Metal Men, Justice League, and Aquaman all being movies in development for Warner Bros., which led us to speculate that a Sandman movie could actually be in the works as well. We even theorized that maybe the way DC Comics got Neil Gaiman to return for another Sandman comic book series was to dangle the carrot that a Sandman movie could be a possibility. The fact that Diane Nelson even went as far as to say that she thought The Sandman could be as rich as the Harry Potter universe is a pretty powerful statement for someone in a key position with Warner Bros. to make. Someone usually doesn't make a statement like that unless there are definite, concrete plans in place. Since we noticed this story yesterday, we've been keeping a close eye on Neil Gaiman's twitter, and it appears as if we weren't the only ones that thought Diane Nelson's comments were interesting. When someone pointed out via Twitter that it was very interesting that Diane Nelson mentioned Sandman as one of the movie projects she wanted to see, Neil Gaiman replied, "It is." What's also interesting is that on Sunday, July 21 at Comic-Con, there is a Spotlight on Neil Gaiman, which in part is focused on celebrating the 25th anniversary of The Sandman. On Saturday, DC Entertainment has a Superman 75th Anniversary panel, where it has been widely speculated that the Man Of Steel sequel will be officially announced. Wouldn't a Sandman 25th Anniversary panel be a great place to announce a Sandman movie? Last year, DC Comics shocked the world by making the surprise announcement that Neil Gaiman would return to write a prequel comic for The Sandman. It was one of the biggest stories of the 2012 San Diego Comic-Con. Could DC shock the world again by having Neil Gaiman announce a movie version of The Sandman at 2013 San Diego Comic-Con? Whether it  gets officially announced or not at Comic-Con, it certainly sounds like things are moving in that direction.

The Sandman Movie: Will It Be The Surprise Announcement Of 2013 Comic-Con?