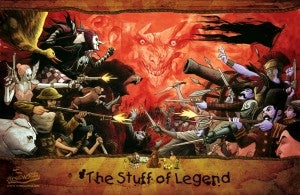 Patrick Melton and Marcus Dunstan, the writing team behind four of the seven Saw films, have been hired to adapt Disney's live-action adaptation of Mike Raicht, Brian Smith and Charles Paul Wilson III's comic book series The Stuff of Legend, The Hollywood Reporter says. The story revolves around band of toys that journeys into a dark realm to rescue their owner from the Boogeyman. The series, while it has elements of the creepy, is largely family-friendly. "We all couldn't be more excited," Raicht wrote on his Facebook page. "Patrick Melton and Marcus Dunstan are extremely talented guys and they look like they will bring a little bit of an edge to the screenplay which is awesome. We still have a long road ahead of us, but it is a super cool start to the journey. We'll have more news soon, I promise."