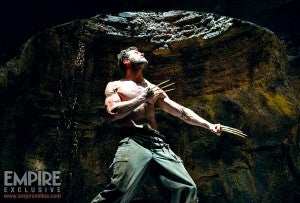 Yesterday's Empire magazine interview has gone live on the Internet today, giving fans a much better look at the "bone claws" picture that accompanied the print version of the story yesterday. It also gives a little more detail regarding what, exactly, might be going on in the film, which has been fraught with rumors over the last week or so, from Famke Janssen's rumored appearance as Jean Grey to the revelation yesterday that the film will take place following the events of X-Men: The Last Stand. "Where this film sits in the universe of the films is after them all," director James Mangold told the magazine. "Jean Grey is gone, most of the X-Men are disbanded or gone, so there's a tremendous sense of isolation for him." He added, "That's something that for me was very important, that I land in a very specific place in his timeline. I wanted to be able to tell the story without the burden of handing it off to a film that already exists and having to conform to it. The ideas of immortality reign very heavily in this story and the burden of immortality weighs heavily on Logan. For me that's such an interesting part of Logan's character that is nearly impossible to explore if you have a kind of league or team movie." Certainly, that's understandable--although it's hard to guess whether the film has always been seen as taking place after everything else, or whether that's just part of keeping it a "stand-alone movie," which is what it sounds like Mangold wants and what he and Fox have been telling fans was coming all along. The film will romp through time a bit, taking place partly in World War II and almost entirely outside of any existing X-Men movie continuity, according to the piece...but that doesn't mean it won't tie into X-Men: Days of Future Past, the time-traveling, reality-bending sequel to X-Men: First Class.

The Wolverine Director Explains The Film