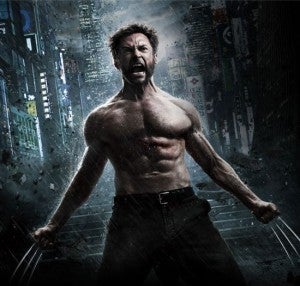 Hugh Jackman has now played the Wolverine six times in movies, even though one of those times was only a brief cameo. Jackman's always made for a good Wolverine, being one of the few actors who has truly come to define a specific character on the big screen. His performances in the various X-Men movies have been solid, but his previous attempt at launching a standalone Wolverine franchise with X-Men Origins: Wolverine is generally considered to have been a disappointment. When it comes to Wolverine, Jackman's been like that star quarterback who always plays well during the season, but who has never won a Super Bowl. The Wolverine is Jackman's latest shot at attempting to prove he can win the Super Bowl by launching a standalone Wolverine franchise.  The Wolverine has a much different tone that any of this summer's previous superhero movies. While Iron Man 3 and Man Of Steel focused on world-threatening adventures, The Wolverine is a much more personal and intimate battle. Based loosely on the popular Chris Claremont and Frank Miller storyline, The Wolverine takes Logan to Japan. The film actually opens with a flashback to World War II, where Logan is imprisoned in a Japanese POW camp in Nagasaki. As the U.S. drops a nuclear bomb on Nagasaki to end the war, Logan saves a Japanese soldier named Yashida. It's an important moment because Yashida learns of Wolverine's healing ability and immortality. When the film flashes forward to modern time, Logan is living as a hermit in the Yukon. However, his peaceful existence proves to be shortlived as Yukio pays a visit to tell Logan that Yashida wants to see him. Yashida is now a rich industrialist, but he's dying. Even though Logan is told Yashida wants to repay his debt, Yashida's true motivation is to steal Logan's immortality. After a brief run-in with Yashida's assistant Viper, Logan winds up going on the run with Yashida's granddaughter Mariko. While the pair are on the run, Logan faces off against an army of ninjas and samurai. Unlike in Logan's previous battles though, Logan finds that his wounds no longer heal quite as fast, as the mutant Viper did something to sap his power. An action sequence where Wolverine does battle on top of a bullet scene is intense and brutal, proving to be one of the highlights of the film. Two-thirds of the way through the movie, Hugh Jackman appeared to be clearly winning his Super Bowl, delivering the most exciting, thoughtful Wolverine movie yet. His fight with Mariko's father Shingen is easily the best one-one-one fight between Logan and an opponent ever shown on the big screen. However, the ending of the film doesn't prove to be quite as strong as the beginning and the middle. For most of The Wolverine, the film plays like a Dark Knight movie, but it seems to try to switch to Iron Man at the end. It's almost like the studio put in a mandate that there needs to be the typical supervillain showdown to wrap things up. The Viper and the giant robotic Silver Samurai work against the gritty realism that The Wolverine had been building on. There is an important plot reason for the giant robotic Silver Samurai, so ultimately the ending does work. The only complaint is that The Wolverine seemed to have something different and unique going and the ending didn't quite live up to the rest of the film. Overall, The Wolverine is Hugh Jackman's best performance as the Wolverine yet. The Wolverine offers up plenty of thrills, chills, and kills. For those that were disappointed that The Wolverine got rated PG-13 instead of R, trust us when we say that it's a very hard PG-13 movie. In fact, there are certain scenes that we are surprised didn't push the film into an R rating, but as director James Mangold pointed out in a recent interview, the MPAA evidently considers mutants to be less than human. Logan does win his Super Bowl, despite nearly throwing away the game near the end. The Wolverine proves to be a worthwhile second effort at launching Wolverine as a standalone franchise. It's a good enough movie that 20th Century Fox should be able to build upon it with sequels if Hugh Jackman continues with the Wolverine character after X-men: Days Of Future Past. And speaking of X-Men: Days Of Future Past, the after the credits scene in The Wolverine is almost worth the price of admission by itself.

The Wolverine Review: Thrills, Chills, And Lots Of Kills

Prisoners of the Ghostland Review: Where Style Leads Nowhere

Mahershala Ali Already Training to Bulk up for Marvel's Blade