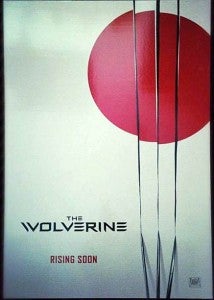 James Mangold, director of the upcoming X-Men franchise film The Wolverine, apparently can't trust everyone who finds their way into his office. An Instagram photo which has now been removed was picked up by Screen Rant this afternoon with the headline, "Is This The First Poster For 'The Wolverine'?". The image, shown at right and reportedly taken in Mangold's office, appears to show Wolverine's adamantium claws shredding a Japanese flag, along with the title of the film and the 20th Century Fox logo. It may be a fake, or a mockup--Screen Rant hasn't been able to get confirmation from Fox yet as to the authenticity of the image, and probably won't--but in all likelihood it's at least indicative of the type of promotional image that fans will see soon. After years of false-starts, the sequel--which follows the events of the critically panned by financially-successful X-Men Origins: Wolverine and is based on the "Wolverine versus samurai" stories Frank Miller and others told in the 1980s--appears to be on track for a summer 2013 release, meaning that while an official release for this image might seem somewhat premature, it's not entirely outside of the realm of possibility that one is at least being developed.

The Wolverine's First Poster May Have Leaked