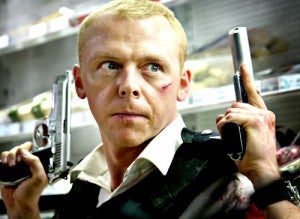 is the highest-grossing Star Trek film ever made at the global box office, and the second-highest domestically behind J.J. Abrams's 2009 Star Trek reboot. Nevertheless, the film has evoked some harsh reactions from hardcore Trek fans, including a recent convention where it was famously voted the worst Star Trek film of all time, being beaten out even by Galaxy Quest, which wasn't officially part of the canon. "I think it's like when you tire of an indie band that you love because, suddenly, they get a number one single. You don't necessarily start disliking their music, but you stop liking them because you're pissed off that they're famous, or whatever," Star Trek star Simon Pegg told The Huffington Post. "Star Trek Into Darkness is the most successful Star Trek movie ever made. It is, in terms of what it took at the box office and how many people went to see it. More people saw that film than any iteration of Star Trek that existed before. That is probably slightly annoying to some Star Trek fans -- which I totally understand." Just because he understands that, though, doesn't mean he's willing to abide the abuse being heaped on the most recent film by fans at conventions and on the Internet. "It absolutely isn't the worst Star Trek movie. It's asinine, you know? It's ridiculous," Pegg added. "And frustrating, as well, because a lot of hard work and love went into that movie, and all J.J. wanted to do was make a film that people really enjoyed. So, to be subject to that level of sort of, like, crass f---ing ire, I just say f--- you. Not you, but the people who said that. It's also that thing, as I say, that it hasn't been around long enough. It's the newest one. It's the one people least recognize. If you look back at things you really love, there's a big list: The things that you've got to re-watch and enjoy, they are going to be more up there. The thing that you know the least will be at the bottom. So it might be that, too, you know?"