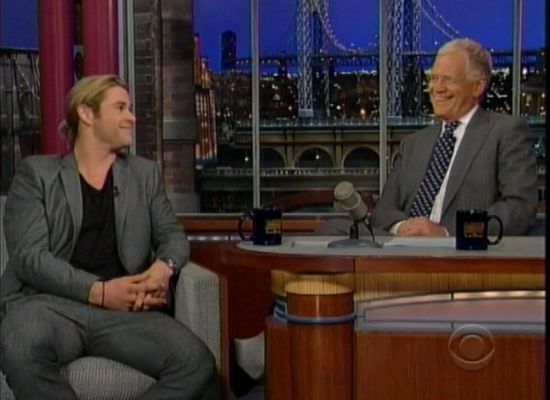 As part of promoting The Avengers, Chris Hemsworth, who plays Thor, made an appearance on last night's Late Show With David Letterman. After noting that looking at Hemsworth was "like looking in a mirror," Letterman began to quiz Hemsworth on Australian geography. In one of the more unusual exchanges, Hemsworth told Letterman that his hometown Phillip Island was not part of any ocean. Hemsworth credited Wikipedia as his source of information. Letterman replied, "Wikipedia is largely fiction." However, Hemsworth rushed to Wikipedia's defense noting, "Well, my biography is true, it said I had seven brothers, four sisters. I was on a various amount of TV shows in Australia." Letterman said, "Now, wait a minute, you had seven brothers?" Hemsworth replied, "No, that's what Wikipedia says." Letterman added, "There you go, you've proven my point for god's sakes." Hopefully, Thor does a better job defending the earth from Loki's attack in The Avengers. After the geography lesson, Letterman mentioned that the ticket pre-sales for The Avengers had been phenomenal. After identifying Chris Hemsworth as Thor in The Avengers, Letterman recommended, "You should get some lotion for that." Letterman also asked about how much CGI was used in the movie. Hemsworth explained, "Well, the Incredible Hulk, obviously the whole thing is CGI, it's a big, giant green monster. And Mark was unable to actually transform into that, so they had to use the computers."