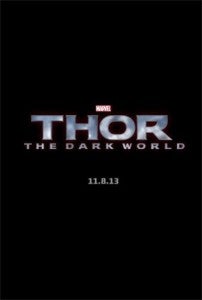 While Marvel Studios has yet to release an official poster or trailer for Thor: The Dark World, there have been several photos and a couple videos from the set leak online. There have also been a couple plot points leak through various means, so we think we have a good enough feel for the movie to make some predictions for 2013. Marvel Studios is taking a gamble by avoiding the crowded summer movie space and releasing Thor: The Dark World in November. Will the gamble pay off? Here are our five predictions for Thor: The Dark World. 5. Thor: The Dark World Has A Stellar $90 Million Opening Weekend  – Boosted by the rising popularity of Chris Hemsworth and the lack of competition in early November, we predict Thor: The Dark World exceeds expectations in its opening weekend. With the first Thor movie debuting at a $65 million opening weekend, Marvel Studios should be very pleased if the sequel opens to $90 million plus. 4. The Sequel Is Better Than The Original – We think that Marvel Studios made the right choice in bringing in Game Of Thrones' Alan Taylor to direct. While all we have to go on is some leaked online set footage, the characters and sets look dark and bold. The direction to bring out the Viking elements in the movie is also a move we think will play well on the big screen. We think Taylor is going to surprise a lot of people with a really good movie that will have appeal beyond just the comic book movie crowd. 3. Dr. Strange Is Introduced – Of all the film predictions we have made, this is the one we're most unsure of. There have been numerous rumors that Dr. Strange will be introduced in Thor: The Dark World. We've seen little in the way of factual evidence to support these rumors, but we just want to see Dr. Strange on the big screen so bad, we're going to go ahead and predict it. Plus, Thor: The Dark World would be the perfect movie to introduce the mystical elements of the Marvel Universe. 2. Thor The Dark World Exceeds $250 Million At U.S. Box Office – With a great director in Alan Taylor and a rising star in Chris Hemsworth, we predict that Thor: The Dark World will be the surprise hit of the Winter movie season. Of course, the movie is already expected to be a blockbuster, but it will be a pleasant surprise for Marvel Studios just how much better the sequel does than the original both at the U.S. box office and the International box office. 1. Marvel Studios Announces Plans For Third Thor Movie – With a great opening weekend and a strong run at the box office, Marvel Studios announces plan to make Thor a trilogy. Both director Alan Taylor and of course star Chris Hemsworth will be brought back for the third movie. We predict Thor 3 will be slated for a winter 2016 release.