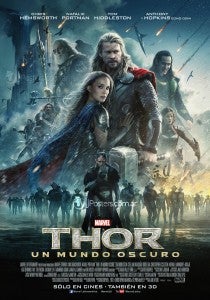 JPosters, a Spanish-language site that sells movie posters, has unveiled a new poster for Thor: The Dark World, showing off a Christopher Eccleston as Malekith the Accursed, one of the film's villains, front and center along with a composite of images we've (mostly) seen before. Given the look of the rest of the characters on the poster, it appears as though there may be a Warriors Three poster and a Malekith solo poster coming soon; the shots of Odin, Sif, Thor and Jane Foster are all those that have appeared on their own character posters. What's also interesting is that--unless my eyesight is just poor, which is a distinct possibility--it doesn't look like Malekith's trademark facial scarring is present on this poster. Could it be that the removal of his mask here suggests that's something that plays out onscreen?