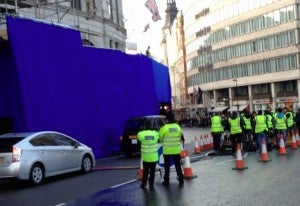 No Asgardians were harmed during the filming of this scene -- mostly because none of the principal cast was on hand in London today as dozens of extras ran away from...well, something. Even money is that it's the alien invasion teased earlier this week by one of Marvel International's executives when he screened some raw footage from Thor: The Dark World, premiered some key art for the film and discussed its prospects at a film industry convention in Italy. This footage comes from a twitter user named Lokiarty, who was in the neighborhood and, besides the obvious question of exactly what it is that people are running from, there's a further wrinkle: filming in London at a time when people have snowflakes and other holiday decorations in the windows, will Thor: The Dark World join Iron Man 3 as taking place at Christmastime, in spite of the fact that the films will be released six months apart? Okay, so it would actually make MORE sense for the November release (that being the Thor sequel), but it still seems a bit odd, doesn't it? In any event, Lokiarty also tweeted out a handful of photos, including the one above of a black taxi cab and a silver Prius which were apparently part of the scene; he also took a second video of those vehicles in motion that can be found on his Twitter feed, and looks more or less like the one below, except with fewer civilians and a bit more blue screen against the side of the buildings.