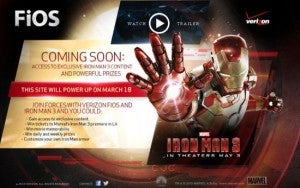 Marvel has already been ahead of the game when it comes to promoting Iron Man 3. Fans have seen more of Iron Man 3 than any other comic book movie planned for this summer. Now, in a marketing partnership with Verizon, Marvel will be releasing three more new Iron Man 3 trailers in April. The Iron Man 3 Verizon promotion site is set to launch on March 18, and Verizon is teasing access to exclusive Iron Man 3 content and prizes. Part of the exclusive Iron Man 3 content is three new Iron Man 3 trailers in April, which will be available on Verizon's homepage for 24 hours before they are released publicly. Verizon will be donating one penny to a charitable organization each time someone watches one of the exclusive trailers. There will also be an Iron Man digital comic with a new page released every week. Fans will also be able to build and customize their own Iron Man 3 armor online. As far as what Iron Man fans can win, prizes include gift cards, autographed memorabilia, Iron Man movie stills, Iron Man DVD box sets, tablets, a TV, a gaming system, and tickets to Marvel's Iron Man 3 premiere in Los Angeles. The grand prize is an Ultimate Iron Man 3 Experience, which is a top secret adventure in Barcelona, Spain. The Grand Prize winners will think up a new invention, then lead a team of Stark Industries designers to create it. After the product unveiling, they get to take it home. Iron Man 3 is set to be released at movie theaters in the United States on May 3, 2013.