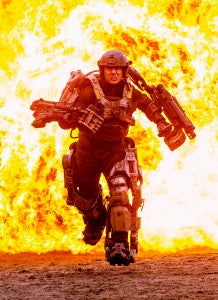 Now called Edge of Tomorrow, the Tom Cruise-starring film adaptation of the best-selling Japanese science fiction novel All You Need is Kill will be coming to San Diego Comic Con International later this week. The film stars Cruise as a military officer killed in action and then stuck in a time loop, forced to relive his final combat in a kind of grisly, horrible Groundhog Day. Edge of Tomorrow is directed by Doug Liman of The Bourne Identity fame and will arrive in theaters June 6, 2014. Emily Blunt also stars.