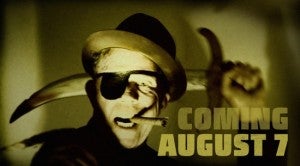 ...Of course not. But given the recent attention given to a thirty-plus-year-old video of Waits that some claim may have inspired Heath Ledger's Oscar-winning portrayal of The Joker in The Dark Knight, it seemed too good to pass up this teaser image of Waits. Clad in pirate regalia, the image offers no further information, except that something is "Coming August 7." Rolling Stone predicted that it's an announcement, either of a tour, or maybe a cruise, a la what Jonathan Coulton does every year with his fans. SF Weekly has  list of ideas as to what the teaser, sent by e-mail with the subject line "Permission to Come Aboard?" might mean. For us, here at ComicBook.com? We like to fantasize that Waits will play the Crimson Corsair in a Before Watchmen spinoff film. Not even necessarily because we'd really want to see it, but because the time would be perfect for him to wade back into comic book waters and because--really?--if anyone were going to make a Before Watchmen film project, shouldn't it be Waits? It would be just outrageous enough to be brilliant.

Tom Waits in Before Watchmen: Curse of the Crimson Corsair?