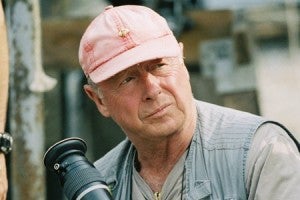 According to ABC News, sources close to the late filmmaker Tony Scott say that he suffered from inoperable brain cancer. No further details were provided, and no official statement from the Scott family or the Scott Free production company has been released to address the question. A number of sources online had speculated that Scott's suicide had been motivated by health concerns rather than depression, but until now there was no evidence to support it. Scott was 68. [UPDATE Aug. 20 11:30 p.m. EST] Later in the day, Deadline Hollywood challenged ABC's claims, suggesting that sources close to the Scott family indicated that his wife was rejecting reports of cancer. While they have yet to fully retract the statement, ABC has certainly walked it back some, issuing the following statement on their website:

"The family of director Tony Scott, who died Sunday after jumping off a Los Angeles bridge, was not aware Scott had cancer, Los Angeles County Coroner Ed Winter told ABC News station KABC in Los Angeles. ABC News was unable to reach Scott's family to confirm the coroner's statement. ABC News had reported the director of films such as Top Gun, Days of Thunder, and Crimson Tide had inoperable brain cancer, citing a source close to Scott."

The director of True Romance and The Last Boyscout, Scott and his brother (Blade Runner and Alien creator Ridley Scott) have been active in recent years as television executives, producing hits like Numb3rs and The Good Wife. Last night, reports began to surface that the Los Angeles County Coroner had confirmed an Anthony Scott had been found dead after an unidentified man had scaled a fence on the Vincent Thomas Bridge and jumped off. Scott's vehicle was reportedly found in a traffic lane on a bridge, and a suicide note was recovered not long after. "Since his death, investigators have located several notes to loved ones that Scott left in his car and a suicide letter left in his office," reports Vanity Fair. According to film critic Roger Ebert, the director had just completed principal photography on Out of the Furnace, with The Dark Knight Rises star Christian Bale and The Losers star Zoe Saldana. "While his brother Ridley won higher praise and more awards for such films as Alien, Gladiator, Blade Runner, Black Hawk Down and Thelma and Louise, Tony focused on red-blooded films of adventure, often using Hollywood's top leading men: Tom Cruise, Eddie Murphy,Denzel Washington, Gene Hackman and Bruce Willis," wrote Ebert in his obituary, which referred to Scott as "a Master."

Tony Scott Reportedly Had Inoperable Cancer - But Is it true?