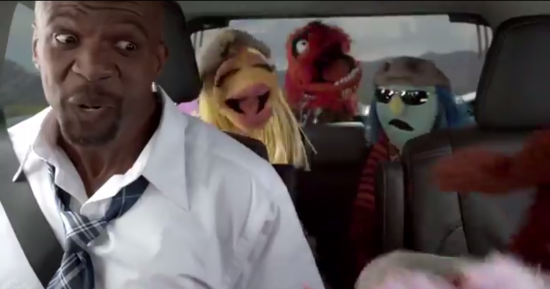 Terry Crews (Brooklyn 99) and The Muppets star in Toyota's Super Bowl ad, released online today. The ad has Crews picking up the Muppets on the side of the road, and the Muppets taking him on a sing-along ride with "no room for boring." "Our game-day spot shows how Toyota Highlander puts the 'fun' in function," said Jack Hollis, vice president of Toyota Division Marketing at Toyota Motor Sales, U.S.A., Inc. "Toyota vehicles are built to last and can even endure the most boisterous Muppets, a former NFL player as well as a center console full of chickens." "We're always game for a wild ride," said Kermit the Frog, who makes a special appearance in the campaign, "as long as Animal's not driving. He doesn't quite get the whole concept of brakes." "It's truly an honor to be a part of this wild ride with Toyota and the Muppets," said Crews. "The Toyota Highlander is the perfect vehicle to teach my character how to loosen up and have some fun. Be prepared for some laughs on game day." In addition to the commercial, the Muppets gang will provide real-time updates as they travel to the big game in their Toyota Highlander on February 2. Fans and customers are invited to chat live with the Muppets on game day by tweeting @Toyota or using #NoRoomForBoring. The Muppets' all-new big-screen adventure Muppets Most Wanted is scheduled to be released in theaters on March 21, 2014. The 60-second spot, entitled "Joyride," will air during Super Bowl XLVIII on Sunday, February 2, 2014.