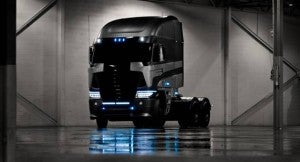 Transformers fans all over the country are talking about Ultra Magnus after Michael Bay released a photo of a new Freightliner that will appear in the upcoming Transformers 4, his final installment as director of the blockbuster franchise. "The adventure continues to transform with a very different offering from Daimler Trucks North America...the imposing 2014 Argosy cab-over truck by Freightliner," says the studio's introductory text, sent along with the image at right. No other information was given regarding the vehicle, which has been pretty standard of late. In the original animated series, Ultra Magnus was a car carrier (later established to be a Freightliner) who briefly took on a leadership role within the Autobots after Optimus Prime's death. Even before Prime returned, though, Magnus was nearly killed and when he returned, gave up the Matrix of Leadership to Hot Rod, who took on the role of Rodimus Prime. Ultra Magnus was voiced by the late Robert Stack in Transformers: The Movie. That was his first appearance for U.S. audiences, although prior to the movie, the character had appeared in a Japanese episode of the series. Given persistent rumors that villains and concepts from Transformers: The Movie will pop up again in Transformers 4, it might be interesting, provided Ultra Magnus is a character cast in the film, to see what his role might be.