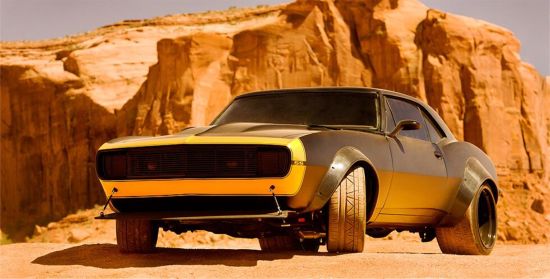 Earlier this week, Transformers director Michael Bay started sharing the first photos of the vehicle modes of the Autobots in the upcoming Transformers 4. While the Transformers movies have done extremely well at the box office (and the casting of Mark Wahlberg in Transformers 4 certainly seems like a positive move), Michael Bay of course has his critics in the fan community, and the latest reveal seems to have generated a little more controversy. MichaelBay.com just released the photo above, which is described as "Bumblebee as a highly modified, vintage 1967 Camaro SS." While the Camaro itself looks very cool, the fact that there's very little yellow on the vehicle is sort of akin to getting rid of Superman's red briefs to some fans. However, the look is actually somewhat similar to the 2013 version of Bumblebee in Transformers Prime Beast Hunters, which also features more black than yellow. Transformers 4 is scheduled to be released in movie theaters in the United States on June 27, 2014.