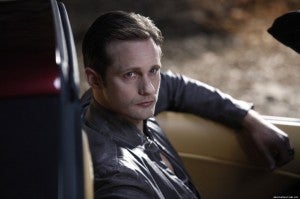 The Crow is turning into the next Star-Lord. For the third time in about two months, the trade press are claiming to have insight into the identity of the studio's favorite choice for the resurrected hero of James O'Barr's supernatural revenge story. And, no, it's not James McAvoy. And it isn't Tom Hiddleston, either. This time, Deadline reports that the favorite is True Blood's Alexander Skarsgard, who they say "is getting numerous offers since his plans to star for David Yates in Tarzan died on the vine when Warner Bros halted the project over budget. No formal offer yet, but it sounds to me like it's Skarsgard's role if he wants it in the F. Javier Gutierrez-directed film series relaunch." Time will tell whether the third time is the charm for this film...although in this case, it's at least the fourth, since Bradley Cooper bailed out a little over a year ago.

True Blood Star In Talks For The Crow