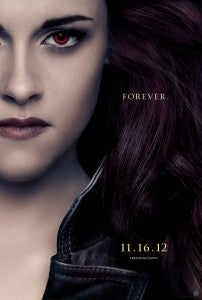 Move over, "Who watches the Watchmen?"! The new Hollywood head-scratcher is "Who teases the teaser?". The answer, as it turns out, is Lionsgate, the studio behind the forthcoming The Twilight Saga: Breaking Dawn Part 2, who this morning release a ten-second blip of footage excised from their first theatrical teaser, which fans should be able to see in the theaters and online soon (perhaps as early as this weekend, attached to any one of the weekend's three big releases (Abraham Lincoln: Vampire Hunter, Brave or Seeking a Friend for the End of the World). Following the birth of their daughter Renesmee and Bella's being turned at the end of Breaking Dawn Part 1, the Cullen clan gear up for the coming war. Check it out below. The Twilight Saga: Breaking Dawn Part 2 will be in theaters November 12.