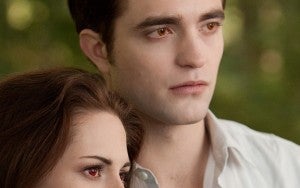 Less than a day after the first official trailer for The Twilight Saga: Breaking Dawn Part 2 was released on Yahoo! Movies, Yahoo! announced that it had broken the record for the most-downloaded trailer in the site's history. The previous owner of the record? According to Deadline, it was The Twilight Saga: Breaking Dawn Part 1. Of course, we'd never make you go to the trouble of all that clicking and typing, so feel free to watch the trailer right here at ComicBook.com via the embed below. The Twilight Saga: Breaking Dawn Part 2 will be released in November and will bring to a close the popular series, which began in 2005 and has been consistently the biggest franchise for Summit Entertainment, which was recently acquired by Lionsgate. It will now look to break records for Lionsgate instead, which might prove harder than it sounds considering that the studio just had a massive success earlier this year with the first installment of The Hunger Games.

Twilight: Saga Breaks (Its Own) Record in 24 Hours