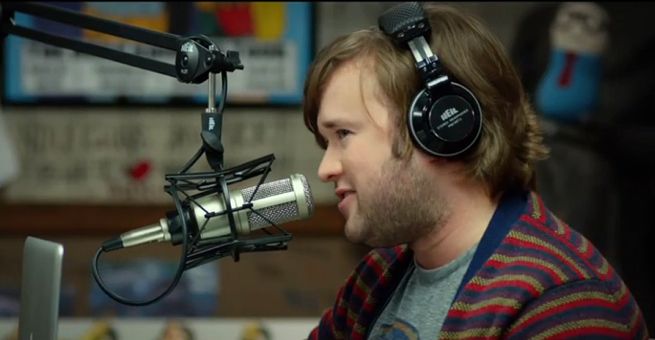 I liked Clerks, I loved Chasing Amy but over time, Kevin Smith's films started to blur together a little too much, at least in my mind. Then Red State came along and shook everything up brilliantly. Now Tusk looks like a complete surprise too. Who would have predicted a film about a podcaster getting abducted and surgically modified until he's more or less a walrus?

Judging from these two clips, production values in Tusk are high, too. This is polished stuff. For a film about a podcaster getting abduc... and so on.

The first of these could have ended up feeling like Phoebe Cates' Presidents Day speech from Gremlins 2 but it doesn't. It does hit the "man vs. animals" thing on the nose pretty squarely, though.

Now, in this second clip we get to see Haley Joel Osment and, on the wall behind Justin Long, faux comic book covers that refer to the "Not See Party." I thought would go some way as to explaining why Osment has been wearing a swastika on the set of Smith's new film, Yoga Hosers, but apparently not. Though the two films share a cast, many of them are playing different characters.

Tusk will be released in the U.S. this Friday, September 19. Over here in the UK, I guess I'll be waiting a while yet...