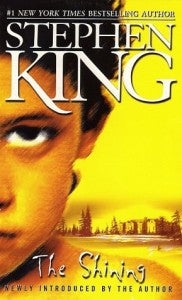 Sure, it's been pretty well-established that it's easier to get a sequel, remake or prequel greenlit in Hollywood than an original property--but sometimes the things you read just boggle the mind. According to Screen Rant, Stephen King recently announced to an audience at George Mason University that he is working on a sequel to The Shining. Picking up thirty years after the events of the first novel, Dr. Sleep apparently centers around Danny, the young boy from the first novel, who now uses his psychic powers to fight vampires. Well, no, not as such. At the outset he's using his powers to help ease the psychological pain of hospice patients. But apparently when vampires show up to feast on those least able to defend themselves, Danny decides to ditch the whole male nurse thing and go Van Helsing on them. I am not making this up. And it's not just that King has decided to write the sequel; apparently he's already well into writing it, enough so that he read a passage from the book to the students at George Mason and Screen Rant linked to a Youtube video of the performance. There will, of course, be immediate speculation that a sequel to the beloved Stanley Kubrick film adaptation is both inevitable and a travesty. I'm not certain that either will necessarily be true, but if they do make one, I hope they use this trailer as a guide. At the same time, filmmaker Wes Craven told Movieweb that a fifth installment of his once-popular Scream franchise is all but guaranteed. Despite a ten-year hiatus between the third and fourth films, and underwhelming box office performance for this year's Scream 4, Craven told Movieweb that producer Bob Weinstein plans on going ahead with the fifth film. Whether Craven himself will be directly involved with the picture is hard to say, although according to the director his contract allows him right of first refusal. Scream 4 will hit DVD and Blu-Ray on October 4.