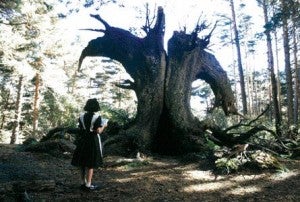 It wasn't that long ago that Daniel Corey announced that Moriarty, his Image Comics series based on the archenemy of Sherlock Holmes, was being adapted as a stage musical with music by Ray Schnurr. Well, it looks like by the time that play is finished being developed, it will have company beyond just the Batman and Spider-Man musicals. In the last few days, Hellboy and Pacific Rim Guillermo del Toro confirmed that he'll be part of adapting his film Pan's Labyrinth to the stage...and now Bleeding Cool is reporting that a British theater troupe will be bringing V for Vendetta to the stage as well. Debuting at the Midwinter LassFest in Manchester, here's what the festival's site has to say about V for Vendetta:

V FOR VENDETTA (January 8th – 10th and 27th) takes us back into unfamiliar territories, this time in a brand new fringe adaptation of Alan Moore's classic 1980's comic strip from the team that brought you the Ballad of Halo Jones in January. It's London, but not as we know it. A shadowy freedom fighter known only as "V" uses terrorist tactics to fight against his totalitarian society. Adapted by SEAN MASON (Hot Fat, the Ballad of Halo Jones, Porridge), the Lass is delighted to premiere this important and prescient tale of a struggle against oppression in the surveillance society.

The Pan's Labyrinth show is a bit farther off, although apparently the always-busy del Toro has worked on it in his downtime for years. It will feature music by del Toro and Jeremy Ungar. Paul Williams has just been signed to write the lyrics with two-time Oscar winner Gustavo Santaolalla writing the music. "I admire and love Gustavo and Paul wrote the perfect album in Phantom Of The Paradise, which I have loved for decades," del Toro told Deadline. Santaolalla added, "I'm so excited about translating Guillermo's magical vision into music and songs. I'm such a longtime fan of both Guillermo and Paul that to work on this with them is truly a dream come true." "I am thrilled to have the opportunity to work with Guillermo and the terrific creative team that we have put together to bring the wonderful film of Pan's Labyrinth to the stage as a musical," Fox said.

V For Vendetta, Pan's Labyrinth To Be Adapted For the Stage