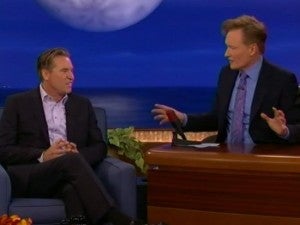 It's been reported that Warner Bros. is looking for an older man to play Batman in the upcoming Man Of Steel follow-up Batman Vs. Superman. In a Monday night appearance on CONAN, former Batman actor Val Kilmer actually likened wearing the Batman suit to making someone feel like an old man. Val Kilmer played Batman in Batman Forever, which was released in 1995. When Conan O'Brien asked why being Batman was like being an old man, Val Kilmer explained, "There's about six reasons. You need help getting dressed. It takes about 45 minutes to get undressed. This is true, you need help going to the bathroom. You can't hear anymore, because it's plastic, do this right now [holding his hands over his ears] That's what it's like. Now pull it like some of our friends in Malibu [pulling the skin on his face tight]. And then when you call out for help no one comes." Val Kilmer added, "In between takes, you're like a mannequin. You're in a kind of lounge chair. You're like, 'Daisy, can I have some water?' No one comes. It literally has to be fed in…you have to have a straw." Check out video of Val Kilmer's comments to Conan O'Brien below.

Val Kilmer Says Being Batman Is Like Being An Old Man