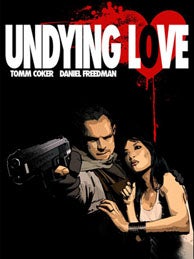 With True Blood, Twilight, The Vampire Diaries and so many other fang-bearing characters out there, surely there's room for another! Hollywoodreporter.com has announced today that the Image Comics mini-series Undying Love will be getting the big screen treatment, courtesy of Warner Bros. Studios. The series, created by Tomm Coker and Daniel Freedman, focuses on the classic tales and elements of vampire legend but with a dash of Chinese myths and monsters thrown into the mix. The Hong Kong crime underworld also plays a role in the story, as the main character, ex-soldier John Sargent, has fallen in love with a vampire named Mei. He sets out on a quest to free her while taking on said underground in search of the vampire who created her. Coker and Freedman will also write the script for the film, which will be a relief and a joy to fans of the series. No other news on the film in terms of cast or production at this time, but those curious about the project should have no trouble finding it, as it has been a recent addition to comic book stores this year. See your local comic book retailer for more information. Warning however, the book is not suitable for people of all ages, so expect mature content, and a probable R rating on this film!