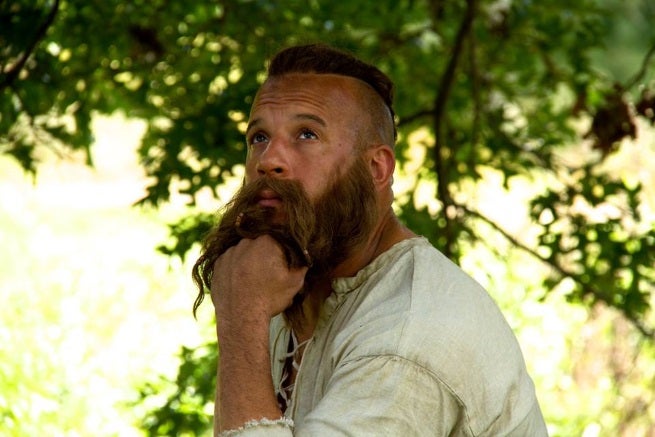 Vin Diesel has released several new photos online showing of his look as Kaulder in the upcoming film, The Last Witch Hunter.

The images were posted to Diesel's Facebok and Instagram accounts and show him with the sides of his head bare, longer hair on the top, and a large beard, which must be a prop from the film's hair and makeup department, since Diesel was clean shaven during the press tour for Guardians of the Galaxy in August.

The Last Witch Hunter is due out in theaters in the fall of 2015. Check out the images below:

Five hundred years ago, war raged between humankind and witches, vicious supernatural creatures intent on unleashing the Black Death upon the world. Armies of witch hunters battled the unnatural enemy across the globe, including Kaulder (Vin Diesel), a valiant warrior who managed to slay an all-powerful Queen Witch, decimating her followers in the process. In the moments before her death, the Queen exacted her revenge by cursing Kaulder with immortality, forever separating him from his beloved wife and daughter in the afterlife. Kaulder has spent centuries hunting down rogue witches, all the while yearning for his long-lost loved ones.

Today, he is the only one of his kind–-the last witch hunter. With the help of Father Dolan, a Catholic priest, and a mystical arsenal hidden beneath New York's St. Patrick's Cathedral, he continues to pursue the renegades and outlaws who endanger humanity. Chief among their adversaries is Belial, a powerful rebel witch who Kaulder believes has found a way to restore the Queen Witch to power and reignite her campaign to destroy the human world.

With the help of Chloe, a goodhearted young witch, Kaulder sets out to stop Belial before he can set his plan in motion, but allies in unexpected places keep the evil witch one step ahead in a cunning cat-and-mouse pursuit that will determine the survival of the human race.

The Last Witch Hunter is directed by Breck Eisner from a script by Melisa Wallack and Cory Goodman.

Vin Diesel Shows Off His Beard For The Last Witch Hunter