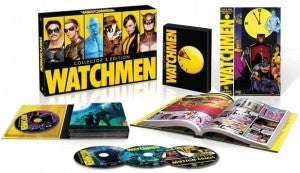 Warner Brothers has announced a collector's edition re-release of Man of Steel director Zack Snyder's "Ultimate Cut" of his feature film adaptation of Alan Moore's award-winning graphic novel Watchmen. The new box set, due in stores on November 13, doesn't actually appear to feature any new content; instead, it's the Ultimate Cut that was previously available--that's the Director's Cut of the film, with the animated feature Tales of the Black Freighter edited into it. The Ultimate Cut has only ever been available in a deluxe box set with the theatrical cut of the film, Tales of the Black Freighter, the Watchmen motion comics and the Ultimate Cut. This new box will feature all of the same things, with the addition of a hardcover edition of the graphic novel that was published just before the film's theatrical release. The film, released in 2009, stars Malin Akerman, Billy Crudup, Matthew Goode, Jackie Earle Haley and Jeffrey Dean Morgan as a group of masked vigilantes in an alternate-reality version of 1985. In addition to Man of Steel's forthcoming June release, which brings Zack Snyder to the forefront at Warner Brothers, DC Entertainment recently launched the controversial Before Watchmen series of prequel miniseries. The stories, which follow the characters prior to the events of Moore and artist Dave Gibbons' series, have largely been received with praise from fans and critics, although the controversy surrounding DC's decision to publish it has hardly ebbed; when Before Watchmen: Nite Owl contributor Joe Kubert recently passed away, a number of derisive references to Before Watchmen pervaded the mourning period following the legendary creator's passing, and J.M. Straczynski, who writes that series as well as Before Watchmen: Doctor Manhattan and Before Watchmen: Moloch, has been an almost constant lightning rod for controversy. The film itself was also somewhat controversial in comics circles, with Moore dismissive of the adaptation and later expressing dismay over the way co-creator Dave Gibbons failed to thank him when Moore signed away his share of the royalties for the film to Gibbons.