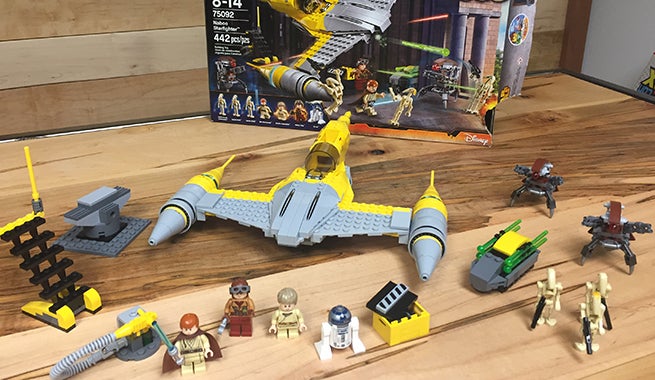 It's hardly even a surprise anymore when LEGO releases new sets of their plastic building blocks that look just like scenes from some of our favorite movies.

Recently, we've opened up LEGO Avengers: Age of Ultron and Ant-Man sets, so we decided to branch out to Star Wars with the LEGO Naboo Starfighter set. The 442 piece set is based on the Royal N-1 Starfighter, better known as the Naboo starfighter, as seen in Star Wars: Episode 1 - The Phantom Menace. As you've already seen if you looked at the cover image of this article, the set does justice to the Naboo starfighter's design from the Star Wars universe, but take a closer look with us in the video below.

The LEGO Naboo Starfighter is a remake of a retired set from years ago. This new and improved version comes complete with 3 minifigures: Anakin Skywalker, Obi Wan Kenobi, and a Naboo pilot. Also included, a detailed R2-D2 figure, a pair of Battle Droids, and a Battle Droid Commander. The set isn't limited to minifigures and the ship. It also allows us to build a pair Trade Federation Battle Drones which are built separately.

Of course, the main attraction is the starfighter ship itself. The detailed finished product rests on top of a rotating and removable stand comprised of LEGO bricks. On the front end, the ship has spring-loaded laser launchers and, on top, a cockpit which can open and close in front of a spot for R2 to ride along in. The jet engines on the side are detachable.

The set checks out at $49.99 which is a humble price for the size of this LEGO model. It will fit right into a collection of any other LEGO or Star Wars memorabilia, for that matter. If you're interested in getting your own LEGO Naboo Starfighter, it is available on the LEGO Shop or at your local toy retailer.