So, around this time last year, we made a series of predictions for 2012. When we were doing some research into an unrelated story we ran across it, and thought it might be fun to look at how we did. Prediction: The Avengers Movie grosses over $500 Million at the U.S. box office. After seventeen weeks of dismal box office results to kickoff 2012, The Avengers movie becomes known as the movie that broke the slump. A fast-paced action adventure with a dash of humor that delights fans and critics alike, The Avengers opens big and flies high with positive buzz. The Avengers dominates the box office for several weeks and crosses just above the $500 million mark. The Verdict: Hell yeah. It did better than we ever predicted, shattering the opening weekend record and setting dozens more on the way to a $623 million domestic take and the third-highest-grossing film ever made. 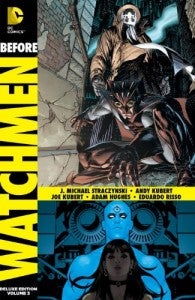 Prediction: Watchmen 2 is the best-selling comic series of the year. I would predict there is going to be a Watchmen 2 prequel, but considering all the recent news, it looks more like a done deal than a prediction. So instead, I'm going to predict that despite (or maybe because of) the controversy, the Watchmen 2 will put up the type of sales numbers not seen in the comic book industry in decades. The Verdict: Nope. Before Watchmen was a big success for DC, probably making them more money than a traditional summer event comic would have made...but it didn't blow everybody else out of the water. All summer long, we had the Zero Issues, we had the  Green Lantern and Batman stuff, we had Avengers vs. X-Men. Before Watchmen was essentially top-selling background noise. The Prediction: Marvel Comics re-launches. After seeing DC Comics hit with the initial re-launch and with Watchmen 2, Marvel Comics pulls a re-launch of their own. The re-launch combines the Ultimate Universe with the regular Marvel Universe, and every title is started over with new first issues. The Verdict: A little yes, a little no. Marvel NOW! relaunched the issue numbers, but not the continuity. There were dramatic changes to the status quo in the Marvel Universe and on pretty much every title...but it's not merging continuities. Although we did get Spider-Men, which kinda played with those themes.

The Prediction: The Dark Knight Rises sets a U.S. box office record with an opening weekend of $181 million. The Dark Knight Rises wows critics, and its complex plot and numerous layers inspire repeat viewings among bat fanatics. After the record-setting opening weekend, The Dark Knight Rises goes on to cross $600 million at the U.S. box office. The Verdict: Nope. You can say what you want about the Aurora shooting having a depressing effect on the box office take, but at the end of the day, The Dark Knight Rises didn't break the record...although The Avengers did. It was projected, before Aurora, to break even THAT record, which would have been phenomenal, but it's hard to guess whether they would have managed it. As it stands, the film didn't even break the $180 million mark we predicted for it, opening at $160 million. Check back later today to find out what we foresee for 2013!