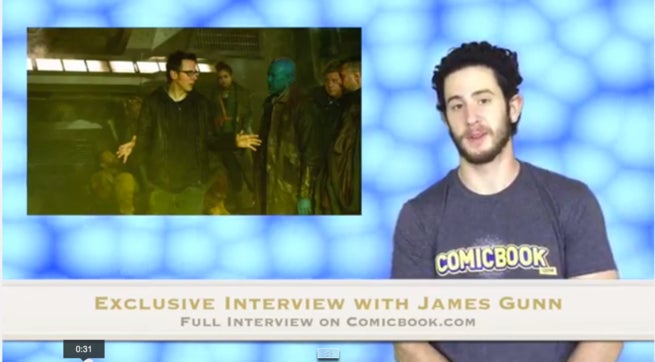 Comicbook.com's weekly round-up brings fans a collection of the biggest stories of the week in comic books, movies, television, and video games. For the week of November 28, host Brandon Davis covers Star Wars, Jurassic World, Guardians of the Galaxy and more.

With Guardians of the Galaxy coming to DVD and Blu-Ray in less than a couple of weeks, James Gunn has been making his rounds promoting the film one last time. This week, he caught up with Comicbook.com for an exclusive interview. Gunn let us in on a few things, like he would love to work Al Pacino into a future film. Gunn also revealed that it is impossible to motion capture a raccoon, which means Bradley Cooper won't ever be doing motion capture work for Rocket, although Cooper and Sean Gunn will continue to be the team bringing Rocket to life. He also said there are a ton of Easter Eggs people haven't picked up on yet. Make sure you check out the full interview on Comicbook.com. Guardians is available now for digital download and comes out on blu-ray, December 9.

To answer our user, "MaxB,"s question, yes, that is definitely Star-Lord riding alongside raptors. In other words- The Jurassic World trailer is finally here and what could you possibly not like about it? Combining a classic film with today's effects, Chris Pratt, and Stephen Spielberg as executive producer smells like a recipe for success. The full trailer can be found on Comicbook.com, but here is a little peek: (ROLL CLIP OF TRAILER, THEN TRANSITION)

Sounds like Christian Bale is still holding on to his role as Batman. While promoting his new film Exodus, he talked to Empire Magazine about saying goodbye to the role. (GRAPHIC OF QUOTE, READ QUOTE ALOUD) "I've got to admit initially, even though I felt that it was the right time to stop, there was always a bit of me going, 'Oh go on... Let's do another, so when I heard there was someone else doing it, there was a moment where I just stopped and stared into nothing for half an hour." (END GRAPHIC) Bale went on to admit that he's 40 now, so he probably should stop being jealous of someone else playing Batman.

Last week, I told you guys Robert Kirkman claimed that the midseason finale of The Walking Dead was going to be pretty deadly. Now, the script from the episode apparently made Daryl Dixon himself, Norman Reedus, cry. "I sat on an apple box with my head between my legs and just bawled for an hour," Reedus told TV Guide. "I really wanted to not tear up during the scene, I wanted to be like I wasted every tear in my body before we started shooting so I just sat there and cried and cried and cried." This sort of statement brings a lot of questions to mind. Is Daryl in trouble, or are his character's two best friends, Carol and Beth. Seems unlikely with this show, but maybe those were tears of uncommon joy. One thing is for sure- we'll find out this Sunday night.

Since we recorded the weekly roundup, the Star Wars: The Force Awakens trailer has been released online. Check it out here.

Well, you're all caught up now. If you haven't checked out Mockingjay Part 1 get out there and do it, but if you want to laugh, Horrible Bosses 2 hit theatres this week and it is hilarious. We'll be talking about the Walking Dead finale this week on the boards, so head over and join us! I'm Brandon Davis, and I'll see you next week.