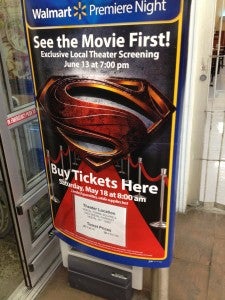 Last week, ComicBook.com spoke with a Wal-Mart executive about their upcoming Man of Steel promotional push. Besides the regular toys, clothes, books and other odds and ends (and Wal-Mart's new policy of allowing fans to pre-order the Blu-Ray absurdly early), the retailer will allow fans to come in on May 18 and buy preview-screening tickets for June 13, the day before the movie officially opens. These Wal-Mart screenings will be the first chance fans have to see the film in the chosen theaters, taking place at 7 p.m., hours before the midnight screenings begin. And, if one location with prices posted is anything to go by, the tickets will be cheaper than you would ordinarily pay for the same tickets at that same theater. At the Wal-Mart in Vestal, New York, the signage at left indicates that Man of Steel tickets for the 7 p.m. screening will cost $8.00 for a standard ticket or $11.00 in 3-D. That same theater is selling Iron Man 3 tickets for $10.00 in 2-D and $13.50 in 3-D if you want to see it in the 7 p.m. hour tomorrow (its first official day of release).

Will Man of Steel Tickets Be Cheaper at Wal-Mart?