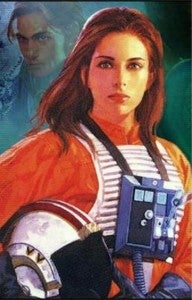 While most of the Star Wars buzz this morning tends to revolve around George Lucas getting engaged, a well-known film blog has kicked off some speculation about the gender of the lead actress in Star Wars Episode VII. In a tweet yesterday, Slashfilm's Peter Sciretta said, "Who said the lead character in Star Wars Episode VII is going to be a male star? : )" While the tweet itself might seem like just a conversation starter, Slashfilm followed it up by including it in article post that certainly seems to hint it is more than just speculation. Slashfilm says that Peter asked them to put his tweet in a Star Wars roundup article, but he couldn't say anymore. Slashfilm goes on to speculate, "…I tend to believe Peter was suggesting a female lead. The obvious candidates? Han Solo and Princess Leia's Jedi daughter (named Jaina Solo in the novels. Novels we know aren't necessarily being adhered too) or Luke Skywalker's eventual wife, Mara Jade." The possibility is certainly an interesting idea, and Disney could be looking at the success of films like The Hunger Games and thinking it's time that Star Wars had a female lead. However, it also seems to fly in the face of comments by Disney Chairman and CEO Bob Iger who hinted during a conference call that the Lucasfilm acquisition was part of a strategy to strengthen Disney's presence in the boys market. Disney has a number of strong female characters already, as Iger pointed out when explaining the Star Wars strategy for TV. Iger said, "Obviously on the TV front, we launched or we re-launched a channel a few years back Disney XD, which had other names in its past. If Disney Channel is focused a little bit more on girls than boys, this is going to focused a little bit more on boys than girls. We started to roll out Marvel shows there. We referenced in our comments about the Lucasfilm acquisition that there are opportunities for television. One big opportunity for us in Lucasfilm's derived IP is on that channel. Again, it gives the ability to fulfill the promise of that channel that much quicker."

Will Star Wars Episode VII Have A Female Lead?