Buried in the announcement that Justice League is officially slated for production at Warner Bros. following Batman vs. Superman comes the exasperating news that the company still has no immediate plans for a Wonder Woman solo film. According to the Wall Street Journal, Warner executives are "warm to the idea of a spinoff starring Gal Gadot as the Amazing Amazon, but there is nothing formally on the cards yet. "[A solo film] is our hope," said Sue Kroll, Warner's president of worldwide marketing. "With the right script, that could be viable. The world is ready for her." 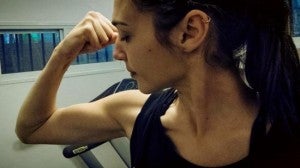 They are, indeed. So much so that the lack of a Wonder Woman movie has been the cause for a lot of derision and criticism directed at Warner Bros. -- criticism that the monolithic competition at Marvel Studios have largely avoided since they have no comparable female character in terms of mainstream awareness. A film version of the hero -- who starred in a short-lived but much-loved TV series decades ago -- has been in various stages of development on and off for years, including a script from Marvel's The Avengers director Joss Whedon. The Heat director Paul Feig recently pitched a Wonder Woman movie to Warners, and filmmaker Kevin Smith thinks it could make a fortune. Recently, Captain America: The Winter Soldier star Anthony Mackie encouraged Warner to make the movie even if they thought it would fail. "We're super excited to have her in the film, it will be a ton of fun," Batman vs. Superman producer Wesley Coller said in a recent interview. "But at the same time, we've got to stay focused on the film we're working on now." Warner executives have been quoted over the last several years as being reluctant to tackle the character since she is perceived as difficult to get right. A planned TV adaptation on The CW was cancelled, apparently in deference to the big-screen iteration, and the recent attempt by Ally McBeal producer David E. Kelley proved a disaster for both Warner Bros. TV and NBC, the network on which it was expected to air. The nature of the Justice League announcement was rather anticlimactic, happening late Sunday night on the East Coast via the Wall Street Journal's Speakeasy blog. It's entirely possible that the next round of casting and/or solo film announcements will be reserved for San Diego Comic Con International in July, where last year the studio made the weekend's biggest splash by announcing Batman vs. Superman.

Wonder Woman Movie: Warner Bros. Has "No Plans Yet"