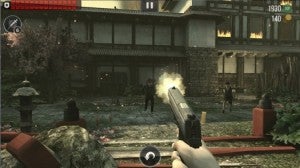 Beginning today (May 30), an iOS and Android game based on the forthcoming Paramount Pictures film World War Z is available for download for $4.99. You can check out the game's trailer below. There's also a gameplay demo a little further down that gives a better sense for how the game actually functions. "We loved the rich world that the filmmakers created, and are thrilled to tell a story that runs parallel to its film counterpart," said Amy Powell, President of Paramount Digital Entertainment. "We wanted to give audiences a chance to truly live the movie in this story-based game." "We were excited to be able to use the cutting-edge Unreal Engine 3 to bring World War Z to life," said Chip Sineni, Phosphor Games Studio Director. "Our goal was to build Paramount a AAA game, and with that came all our favorite bells and whistles, like ambient occlusion lighting, multipass blended textures, and hordes of enemies to fight."