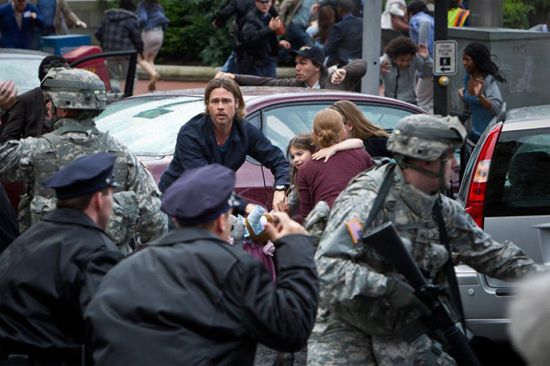 The Screaming Cop Getting Hit By A Truck

– As Gerry Lane gets out of his car to look around, a cop yells at him to get back in his car and remain with his vehicle. As soon as Gerry is back inside his car, a truck comes crashing into the scene and takes out the cop.

– We have no idea why or how someone would build a computer program to count the total population loss during a zombie apocalypse, but it sure makes for a cool graphic during a movie trailer. The Total Population Loss Counter got up to 4.416 billion before the screen faded to black.

Shooting Zombies On A Bus

– In our first good look at the zombies, they are swarming onto the top of a bus and somehow flipping it over in the process, while the military shoots at them with machine guns. It's an awesome introduction to the zombies, and a clear depiction of what sets them about from the slow moving zombies often seen on TV and in the movies.

– As Gerry and his family make a run for a rescue helicopter on the top of a building, a group of zombies chases after Gerry. Even though Gerry makes it to the helicopter and gets away, the zombies are undeterred and keep chasing right off the edge of the building.

– It's one of the last scenes in the trailer, and it's probably the most visually powerful scene in the trailers. The zombies form a pyramid as they climb on top of each other in rapid succession in an attempt to scale a wall. The zombies look like an angry swam of ants, and the scene really shows the type of threat that they represent.