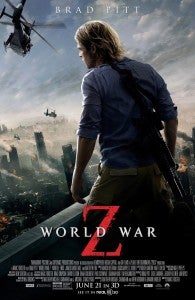 Star Brad Pitt is front and center (alright, slightly right-of-center) in the newest poster for Paramount's World War Z, the ambitious, big-budget adaptation of Max Brooks's novel of the same name. While the novel was a faux spoken history, the film appears to be a more standard action movie, with trailers featuring Pitt and co-star Mireille Enos running from the oncoming zombie menace. According to the studio, the story revolves around United Nations employee Gerry Lane (Pitt), who traverses the world in a race against time to stop a pandemic that is toppling armies and governments and threatening to decimate humanity itself. Widely expected to be one of the summer's big flops, the film was said to have serious problems when they went back for reshoots and delayed the release date--but the first screenings were held last night and came back with ecstatic fan response and fairly positive buzz from critics. Whether that will help World War Z perform at the box office remains to be seen, but it can't hurt. You can check out our recent interview with World War Z creator Max Brooks here.