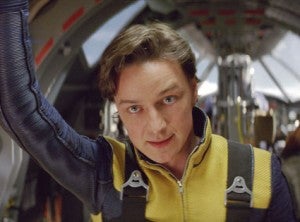 We have our first review blub for X-Men: Days Of Future Past. Of course, it comes from one of the stars of the movie, so it's got to be just a little bit biased. Really, when was the last time you heard an actor describe any sequel as smaller and not quite as exciting as the original? At least that's not the way actors tend to describe sequels before they are released. Sometimes they might bash them years later if they flop. However, in the case of X-Men: Days Of Future Past, we tend to believe that James McAvoy is shooting us straight, when he tells IGN, "Potentially it's going to be the biggest, most epic X-Men they've ever had. I think it's the second biggest production Fox have ever embarked upon, behind Avatar. So they're definitely going for it." While McAvoy didn't reveal any major spoilers about X-Men: Days Of Future Past, some of his answers did provide some insight into what other characters his version of Professor X will interact with. Not surprisingly, he won't be interacting much on screen with the Patrick Stewart's version of Professor X. McAvoy revealed, "His last day was my first day and that was it. Then we were done. But we did crossover and we do get a scene together." As far as who McAvoy worked with the most, McAvoy said, "Weirdly the people that I spent the most time with acting-wise was not Michael this time, it was Hugh [Jackman] and Nick [Hoult]." X-Men: Days Of Future Past is set to be released in movie theaters on May 23, 2014.

X-Men Days Of Future Past: Biggest, Most Epic X-Men Ever According To James McAvoy