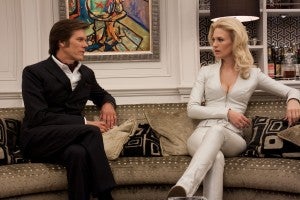 star January Jones said during an interview at the Sundance Film Festival earlier today that she's still not certain that she'll be called upon to reprise her role as Emma Frost, the White Queen in X-Men: Days of Future Past, the upcoming sequel to X-Men: First Class, in which she starred. "I don't know that I'm in it," Jones told Collider. "I don't think Emma's in this one. Well, they haven't told me if I am. I wouldn't put it past them, though; I got the script for the first one on the airplane on the way there. It's called Days of Future Past I think, and I think it's more about James [McAvoy] and Michael [Fassbender] and then Patrick [Stewart] and Ian [McKellen], and I think it's gonna go back and forth with those so I don't think Emma's in those bits. I don't know, I really don't know." Rusty on our Days of Future Past trivia, we looked into it a bit; here's what Emma's Wikipedia page has to say on her role in the classic comics story on which the film is based:

"Emma was the former White Queen of the Hellfire Club, but retreated to a technological base off the coast of India after a majority of the mutant population was wiped out. She sold her telepathic abilities in services of mutant leaders and was eventually approached by Jubilee and Magneto to save Wolverine, who was mind-wiped by the Hellfire Club's Red Queen, Psylocke. Emma managed to restore Logan's mind and joined Magneto and Jubilee in defeating Psylocke and the Hellfire Club's plans for world domination. They continued to operate out of Emma's base with other members as the "X-Men" while Emma attempted to rehabilitate Psylocke back to the side of good."

Whether Jones's filming schedule on Mad Men will be a factor or not is difficult to say; obviously, if her part is small Fox could presumably work around potential conflicts and continue to put off committing to her until she's needed. X-Men: Days of Future Past is set for release on July 17, 2014.

X-Men: Days of Future Past May Not Bring Back January Jones