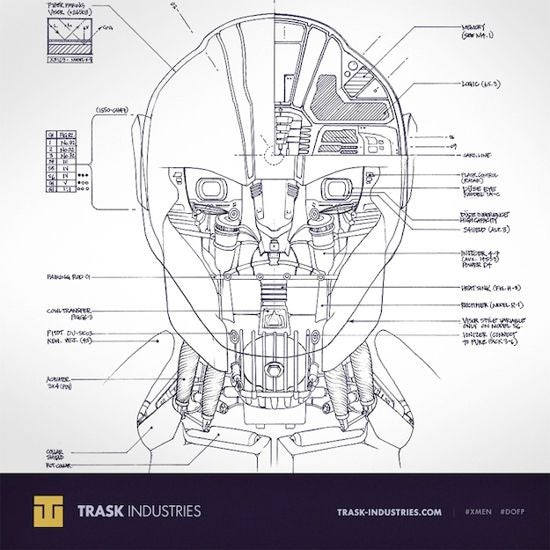 FOX is doing a better job with their viral promotion of X-Men: Days Of Future Past, then any other film of theirs in recent memory. Earlier today, the official Twitter account for FOX's X-Men Movies tweeted out the Sentinel blueprints above, along with the message, "Enjoy this exclusive look at our revolutionary Sentinel technology." On the viral site located at Trask-Industries.com, FOX has also been releasing a ton of background information on the Sentinels. According to the site, "In 1973, Trask Industries introduced the first Sentinel production model, the Mark I. Bolivar Trask's groundbreaking research in AI, robotics and autonomous ballistic systems laid the foundation for the world's most capable anti-mutant defense system. Since the program's inception, we've continued to advance our founder's cause through eight additional generational upgrades and enhancements. As we celebrate five decades of achievement, we also bid farewell to regular production of the Mark I and shift our efforts to full-time manufacturing of the Mark X — our first complete overhaul of the Sentinel line. These highly anticipated units will combine next-generation nanotechnology and bioweapon breakthroughs, promising an even brighter future for the human race." X-Men: Days Of Future Past is scheduled to be released in movie theaters on May 23, 2014.