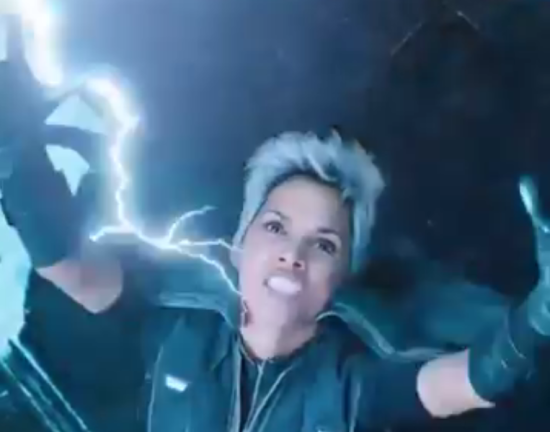 The first officially-released footage for X-Men: Days of Future Past was released today, just shortly after Marvel Studios released the trailer for Captain America: The Winter Soldier. Because clearly, neither Bryan Singer nor Fox are at all upset that they're competing with the Avengers franchise to see who can make a cooler Quicksilver. It was only seven seconds of footage--a teaser for the teaser, not unlike what Marvel released for Captain America yesterday--along with music but no dialogue. It's clever, though, because instead of drawing comparisons to the well-received trailer for Captain America, this has prompted questions on the part of fans wondering what the heck they're seeing. So, as you can imagine, it's been watched and rewatched obsessively until we came away with some thoughts and questions about the teaser. Here we go: 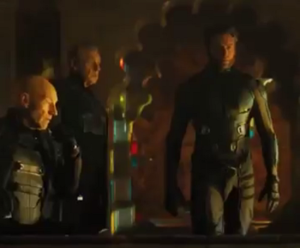 Everyone gets a costume It's like the Oprah audience: You get a costume, and you get a costume, and you get a costuuuuuuume! We see that not only is Wolverine upgrading from his leather duds to something a little more Dark Knight-inspired (with the "plated" look and the armored shoulder pads and the like), but Professor X is wearing some snazzy time-traveling duds, as well. You can't see what Magneto is wearing there, between the light his either cape or trench coat, but it's distinctly possible they're all wearing the same outfit and that the outfit in question is necessary when interacting with the super-technology they're about to use. 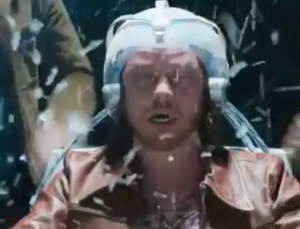 Cerebro: First Class We get our first look at James McAvoy's First Class version of Professor Xavier latched into what looks like a much more "finished" version of Cerebro than we ever saw in that film. In fact, it looks pretty much like the Bryan Singer version (I mean...yes, it is by definition a Bryan Singer version because it's in this movie, but you know what we mean). Could it be that we also have other trappings of the X-Mansion, like the Danger Room, existing in the past of this movie? 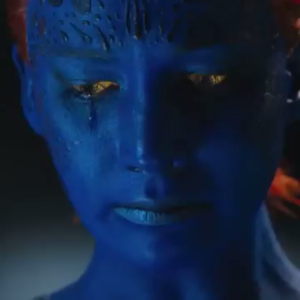 Mystique is having a hard time At the start of the trailer, we see her crying, upright and alone. Later, we see her crying again--this time frantic and scared, while apparently being dragged along the ground by Magneto's powers. Because, heck, we've got Jennifer Lawrence and what's the point in having one of the best young actors on the planet if you can't make her cry into her 14-hour application of blue makeup? Whatever is going on, it seems as though Mystique (who wasn't particularly a major character in X-Men: Days of Future Past the comic book series) will have a pretty significant character arc in this film. Watch out for her in future trailers; she'll probably be pretty interesting. Political intrigue Speaking of Mystique, she's also got a part to play in the next thing that struck us: we're going to have quite a bit of politicking going on here, from the look of it. We saw the President's motorcade amid a Vietnam War demonstration, and we saw what appears to be workers opening a giant vault in the floor of the Oval Office (possibly a safe room? Nixon was paranoid and the '70s were particularly strange times in the context of this film, and mutant unrest).

Oh, and we got to see Mystique apparently kicking a bunch of guys in the White House. I suppose it makes sense; if there's an assassination attempt on Nixon or any other politician in the film, Mystique would be an ideal choice to attempt it because the shapeshifter is as good a candidate to get close to a target as anyone. Of course, in the low resolution of the Instagram-published teaser, it's impossible to tell for sure who she's after here (or, heck, that it's for-sure Magneto who's dragging her around in the other shot).

What the heck is Wolverine doing? It looks like Wolverine is using bone claws when he attacks this person--is it Magneto? We can't tell, but he seems an unlikely candidate unless this is a different/younger Wolverine we're seeing. In any event, whether he's using bone claws or not, there's a mystery as to who he's going after here and, assuming the juxtaposed shots really are in the same place at the same time, who those gunmen are who are taking shots at him. Their clothes look like they came out of the 1970s, so it seems likely that's part of a sequence after he's time-traveled...but between time-travel and low resolution, it's difficult to figure out what the heck is going on in these seven seconds...!