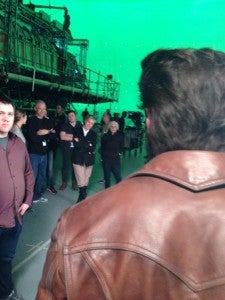 It hasn't been very long since Hugh Jackman wrapped production on The Wolverine, but he's back in the role already on the set of X-Men: Days of Future Past, where he's apparently been fitted for one of the most iconic pieces of wardrobe in the character's history. Here, according to director Bryan Singer's Twitter account, is a shot of the back of Hugh Jackman's head as he tries on the brown leather jacket seen on the cover of The Uncanny X-Men #141, one of the most recognizable comic book covers every drawn (below, by John Byrne and Terry Austin). The crew are looking on and the whole place is surrounded by green screen; is this Logan looking out onto the destroyed alternate future of the story? Perhaps the inside of the giant structure tweeted out not long ago by Singer? Just a very, very weird weather condition? The world may never know.

The film, which serves as a sequel to both X-Men: First Class and X-Men: The Last Stand, will feature over a dozen actors from both iterations of the continuity. Two different verisons of both Charles Xavier and Magneto are coming back, clearing up screen time for James McAvoy, Michael Fassbender, Sir Ian McKellen and Sir Patrick Stewart. The story is (loosely, it seems) based on the classic X-Men story of the same name, by writer Chris Claremont with Byrne and Austin on art. Days of Future Past (in the comics) featured Kitty Pryde spurring the X-Men to action against the Brotherhood of Evil Mutants, who are plotting to assassinate an anti-mutant U.S. Senator. In the comics, his death provokes a massive reaction from the U.S. government that results in mutants being forced into internment camps. When Pryde manages to project her knowledge back in time to her younger self, the team's mission becomes to protect the man and change the course of time. The original story also leans heavily on Wolverine, meaning that the studio felt obliged to burn off the last Wolverine movie on his contract to make it happen. Like Robert Downey, Jr., it's unclear yet whether Jackman will sign up for more installments.