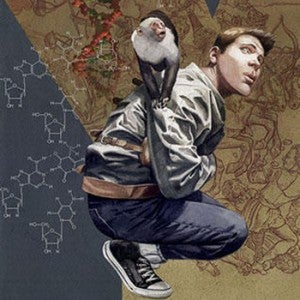 's Heat Vision blog is reporting that Matthew Federman and Stephen Scaia are in final negotiations to write the film adaptation of Brian K. Vaughan's hit Vertigo series Y: The Last Man for new Line Cinema. The pair have a long history with genre fare, having written episodes of Jericho (which later became a comic from Devil's Due) and Human Target (based on a comic by DC/Vertigo). About six months ago, the pair were signed by Sony to write a reboot of Zorro for the studio. In Y: The Last Man, twenty-something slacker and part-time magician York Brown awakes one day to discover that every male mammal on the planet has spontaneously died, with the exception of himself and his pet capuchin monkey Ampersand. In an around-the-world quest to find the love of his life, he has to make stops along the way to defend himself against capture, rape or murder at the hands of women who have their own agenda for the last man alive, as well as working with geneticists and what little remains of the government on ensuring a future for the human race. The film has been in development at New Line for years and it's looked a number of times as if it were close to becoming a reality, only to fall apart again. At one point DJ Caruso was set to direct, generating rumors that Shia LaBoeuf would star. LaBoeuf starred in the techno-thriller Eagle Eye and the Hitchcock remake Disturbia for Caruso around the time Caruso's version of Y: The Last Man seemed to be coming together.