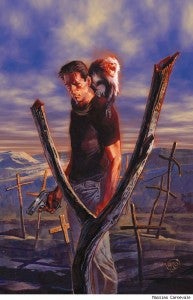 Y: The Last Man has been in development for almost a decade, but the movie finally appears to be moving forward as a priority. Vulture is reporting that sources are telling them that New Line Cinema is putting Y: The Last Man on the frontburner. Apparently, the studio is really excited about the latest script draft from former Jericho writers Matthew Federman and Stephen Scaia. They are so pleased that they have even started meeting with prospective directors. The Y: The Last Man comic book series was written by Brian K. Vaughn. The storyline focused on Yorick Brown, the last surviving man on earth and his pet monkey. Given that the top three movies of this past summer were all comic book movies might also be helping New Line Cinema realize that its time to move forward with this project.