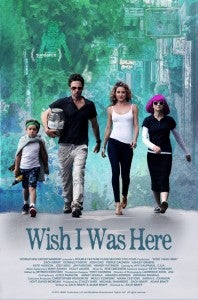 Ahead of the film's world premiere at the Sundance Film Festival in Park City, Utah, actor and filmmakers Zach Braff has released the theatrical poster for his upcoming film, Wish I Was Here. Funded via Kickstarter to the tune of more than $2 million, Braff's film became the center of a passionate debate about the purpose and function of crowd-funding sites and whether people with personal wealth should use sites like Kickstarter and IndieGoGo to finance their passion projects if they can't get studio or publisher backing. A follow-up to Braff's critically-acclaimed directorial debut Garden State, Wish I Was Here follows a struggling actor (played by Braff) who uses his childhood fantasy life as a "space knight" as a teaching tool when he's put in a position where he has to home school his two children. 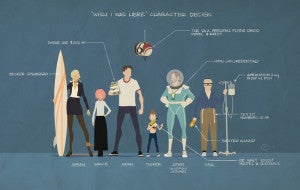 The film, which takes place partially at Comic-Con, also stars The Big Bang Theory's Jim Parsons, Kick-Ass 2's Donald Faison and Kate Hudson. Braff, best known for nine seasons on the NBC/ABC sitcom Scrubs (on which he starred with Faison), has said that there is no solid release date in place yet but the film's target date when the Kickstarter was still live was to be in theaters in September 2014.

Zach Braff's Wish I Was Here Gets a Movie Poster