We all know the dread of another long commute during the holidays. Whether it's a cross country drive, excessive layovers while flying, or some other form of transportation purgatory, we all must endure the long trek home to be with loved ones. While the celebrations may be worth it, the time spent on the road can still be interminable. Luckily, there are comics to keep us company, and we have a few choice recommendations for you this holiday season.

All of these collections fit two key criteria. First, they're long enough to endure the worst layover at any airport or the backseat of car for an entire tank of gas. Second, they're not standard recommendations. That means you won't find Watchmen or All-Star Superman on this list. All 10 of these books are hidden gems that you most likely haven't read, even if you've heard of them. They also run the gamut in terms of style and genre, so there's bound to be something for everyone.

So click ahead to find a new favorite comic to keep you company during the long trek hope. We at ComicBook.com wish you safe travels, and we hope you enjoy the chance to catch up on some great comics.

'Johnny Wander: Our Cats Are More Famous Than Us'

Johnny Wander is one of the great webcomics of the past decade, "wandering" through topics of young adulthood that range from the hilarious to the much more serious. This collection is a great introduction to the sprawling comic and why it has struck a chord. By the time you finish this biblical hardcover, it'll be no surprise this comic won an Ignatz Award.

Sandman Mystery Theatre is the most underrated Vertigo publication of all time, probably because it shares a namesake with Neil Gaiman's much better known series. This take on pulp stories through the gasmask of Wesley Dodds is a perfect blend of mystery, adventure, and far darker themes. Be sure to check out this forgotten classic ASAP.

The oversized issues of Head Lopper have become a quarterly delight for fans of Andrew MacLean's artwork. These adventures are a modern descendant of the best Conan comics, packing intense action and discreet protagonists side-by-side. MacLean's monsters and battles pack a real punch in pages that require readers to linger, even when they don't contain a single word.

There are few comics as consistently great as Usagi Yojimbo being published today, and there's no better place to start than with the first "Saga" collection. It's a massive combo of stories that range from single issues to much grander epics. If you've never checked out this samurai bunny before, then now is the time to start and this phonebook of stories is the place to do just that.

This dystopian vision of a future United States divided between those who have everything and those barely surviving is feeling more prescient by the day. The heart of the story is hope though, focused on redemption, forgiveness, and new life. Hayden Sherman's artwork is a discovery, stark and filled with cutting lines, yet the harsh faces it evokes ultimately carry the story to a place that might inspire you at the end of a long and rewarding read.

'Challengers of the Unknown by Jack Kirby'

Inks by Marvin Stein, Roz Kirby, Wally Wood, and others

This is a perfect starting point for any readers interested in discovering the roots of the Silver Age of comics or finding what makes Kirby the defining figure of this time. His various collaborations as writer and artist, and with many inkers, help to explore what made the man "The King" even before he came to Marvel. This collection is also packed with tons of fun sci-fi and adventure stories bound to entertain for hours.

If you've never read Inio Asano or don't consider yourself a fan of manga, this is a great place to give it a try. The story is slice-of-life, focusing on a set of young adults finding their place in the world and making music. That may sound lowkey, but it quickly becomes high drama with a few surprises. Asano's incredibly realistic faces and settings form an irresistible emotional reality. This is a reality that will absorb you and you'll be reluctant to set it down when it's done. 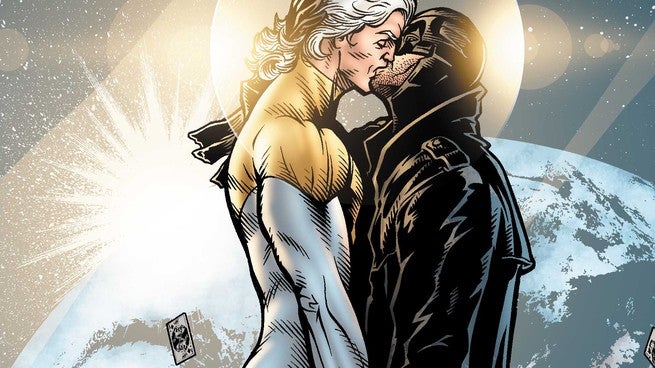 Art by Brian Stelfreeze, Darick Robertson, Chris Sprouse, and others

The ongoing Midnighter series from Wildstorm that preceded the most recent Rebirth revival brought a wide array of emerging talent together. The list of artists and writers on these 21 issues are an all-star array today, and it's easy to see why they caught so much attention in these pages. There are fascinating experiments in formalism like a backwards comic that reads perfectly and some intense romance. It all works as a great collection of superhero talent.

Art by Brian Bolland, Carlos Ezquerra, Mike McMahon, and others

While you might normally want to start at the beginning, if you've never read any Judge Dredd stories then this fifth phonebook-style collection is the place to dive in. It collects some of the greatest Dredd stories of all time from some modern comics legends. Brian Bolland's work in this volume is stellar and in combination with writers like Wagner and Grant, they present the best this British icon has to offer.

Art by Tony Moore, Tom Fowler, Stefano Caselli, and others

Venom gets a bad rap, considering the character is normally associated with excessive violence and vigilantism. Rick Remender brought a new style to that formula though with the introduction of Flash Thompson. This volume collects the first half of the best Venom run ever, focusing on themes of forgiveness and failure. It's not all sadness though as Remender's collaborators still provide flashy action and some truly grotesque symbiote moments.