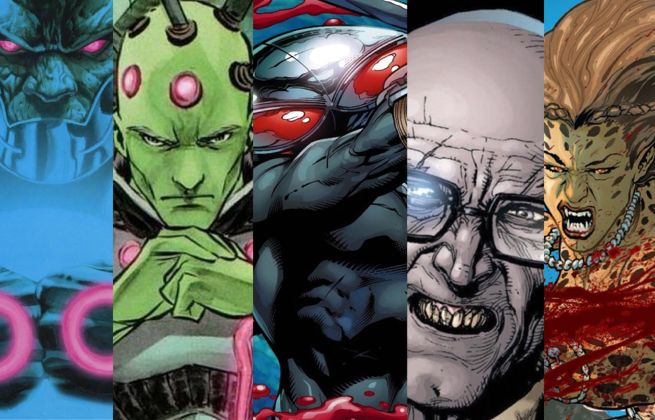 With nine new films in development over the next six years, DC and Warner Bros. have laid the foundation for a whole franchise of superhero movies starring the likes of Superman, Batman, Wonder Woman, Green Lantern, Flash, Aquaman and Cyborg. But what about the bad guys? Any superhero movie fan will tell you that a compelling villain is central for a top notch flick. Fortunately, DC has a fantastic rogue's gallery to choose from, giving the company plenty of possibilities for the big screen.

These following 10 villains are among those that would probably work best in the DC/WB Cinematic Universe. To be fair, this list tries to match a villain with each of the nine films that have been announced by DC/WB. It also intentionally omits any speculation about villains for Superman/Batman solo films since those were not part of DC/WB's big announcement last week. And since it's already been confirmed that Lex Luthor will appear in Batman V Superman: Dawn of Justice and Black Adam will be featured in Shazam, both of them were taking out of the running as well. 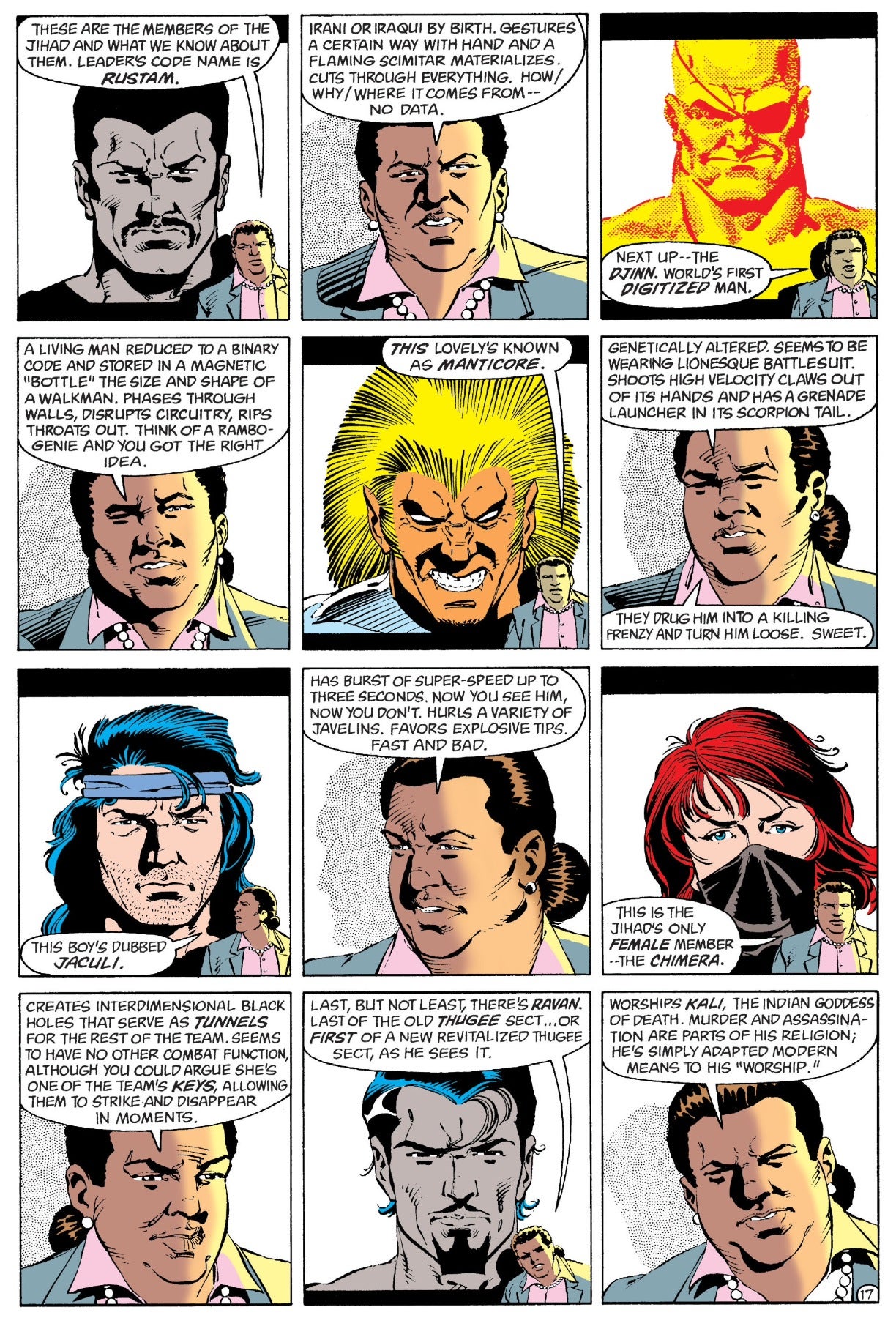 Because Amanda Waller's Task Force X, more popularly known as the Suicide Squad, consists entirely of supervillains who agree to perform incredibly dangerous tasks for the government in exchange for their freedom, it might seem silly to speculate about a few more evil doers for this movie. But since the film has already been described by director David Ayer as "Dirty Dozen with supervillains," there has to be some sort of political/government threat that the team is tasked with defeating. In John Ostrander's late-1980s Suicide Squad series, arguably the most famous volume of the book, the team's chief antagonists were the terrorist group the Onslaught (formerly known as the Jihad). The group, which hails from the fictional Middle Eastern country of Qurac, would definitely give a Suicide Squad film a rather "current" feel given the state of geopolitical affairs. 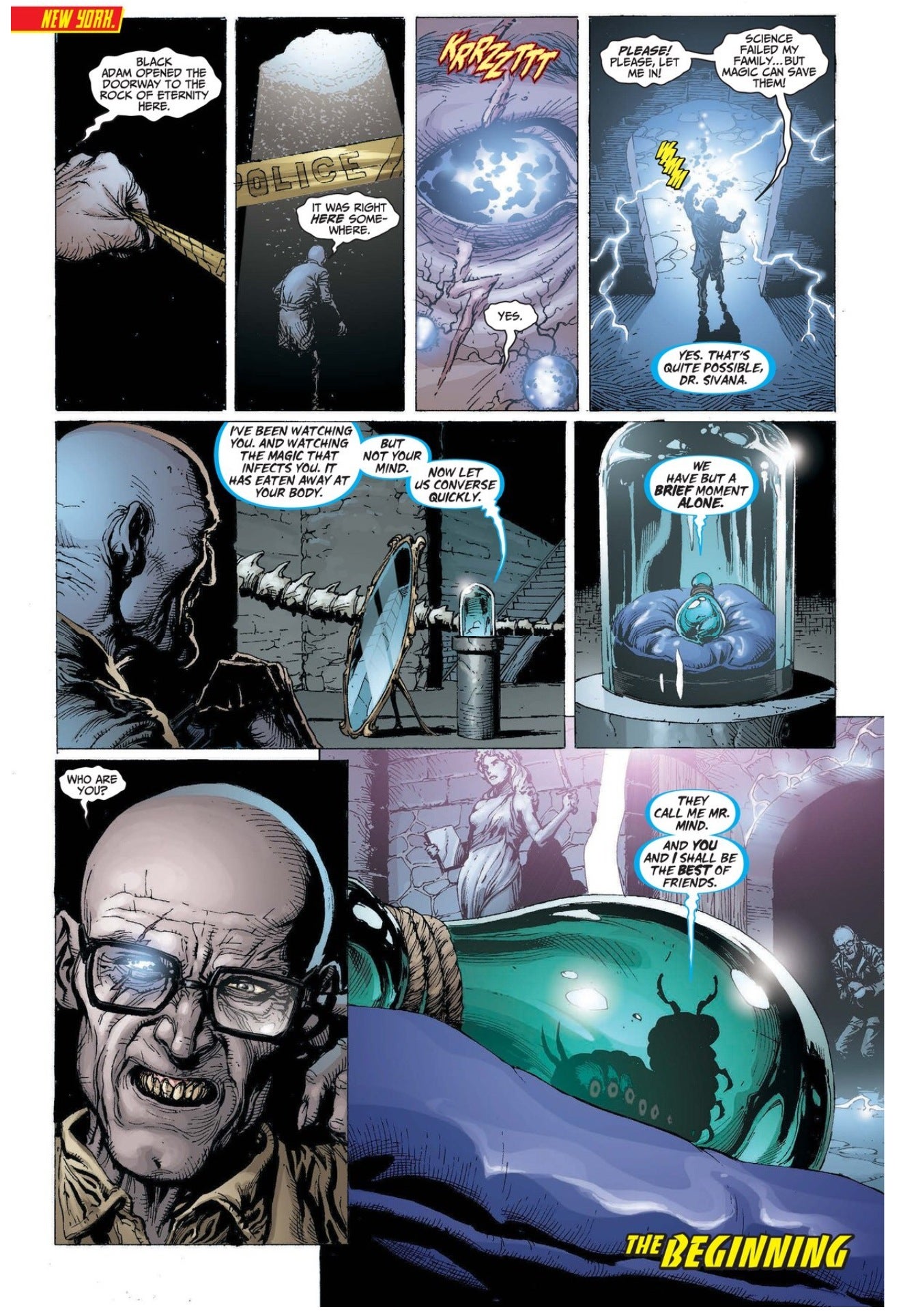 With Dwayne "The Rock" Johnson already confirmed to portray long-time Shazam adversary Black Adam, and with other reports indicating that DC/Warner Bros. will go the "anti-hero" route with Johnson's character, perhaps the evil scientist Doctor Sivana will appear in the Shazam film as a more straightforward villain. It's not like Sivana is without some clout either as one of Shazam's oldest and most persistent opponents. He could also be presented as he's depicted in Jerry Ordway's Power of Shazam graphic novel – the story that cemented Shazam and the Marvel Family in the modern DC Universe. In that comic, Sivana is more of a Lex Luthor-esque tycoon who employs Black Adam in his human form (Theo Adam), as his hired muscle. 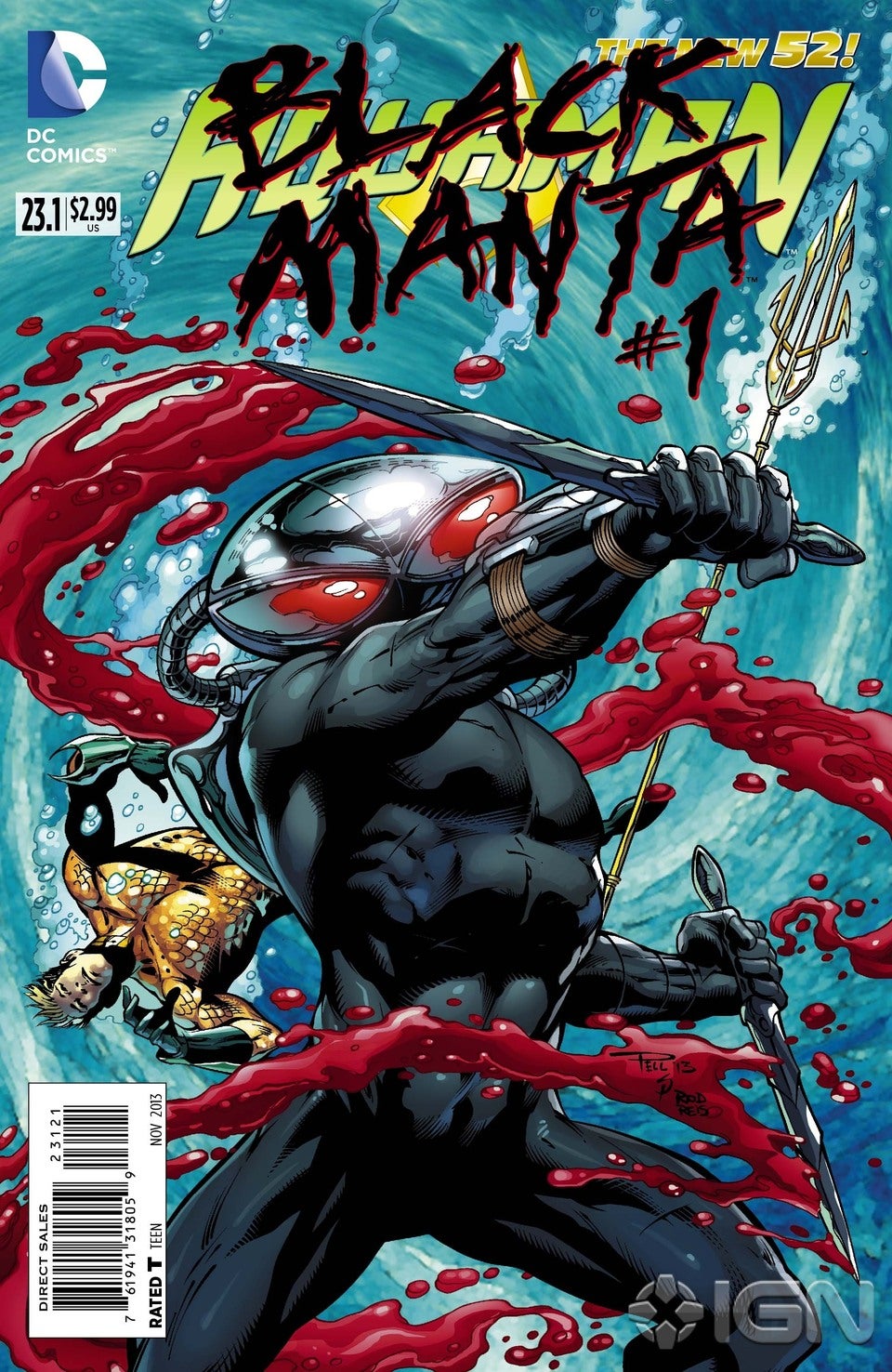 Considered by many to be Aquaman's arch nemesis, it's difficult to see a scenario where Black Manta does not play a critical role in 2018's Aquaman film. Since first appearing in DC's Universe in 1967, Manta has been at the center of a number of traumatic incidents in Aquaman's life, including the murder of his young child, Arthur Curry, Jr. – a story that had a long-lasting impact on Aquaman and the comic book industry in general given its shocking subject matter. In the New 52 reboot of the Aquaman universe, things are once again quite personal between Manta and Aquaman with the villain vowing painful revenge after the hero accidentally kills Black Manta's father. In one storyline, Manta kills Vostok-X, a member of the Others, the six-member team that has been assisting Aquaman in chasing down Black Manta. 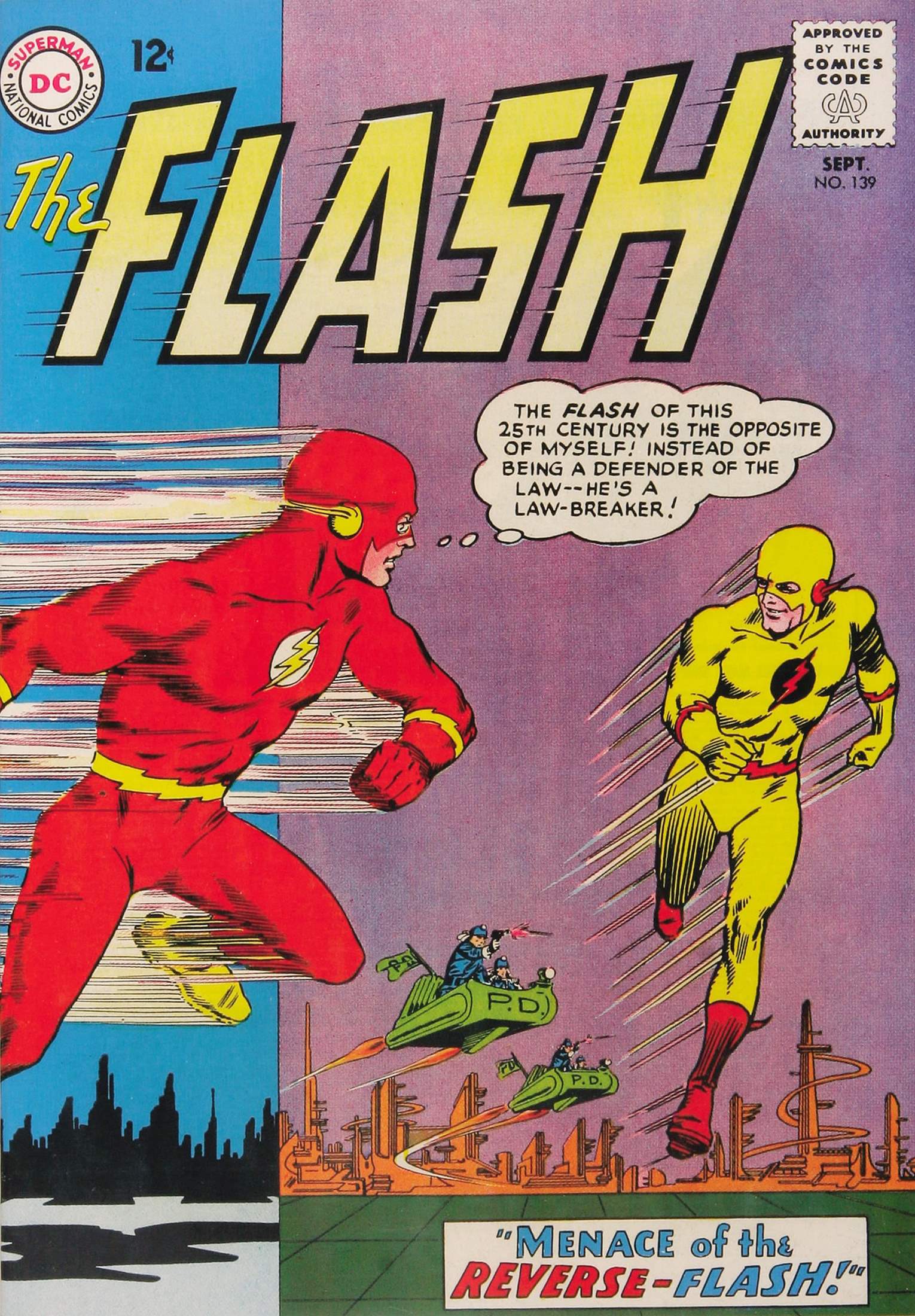 Since the CW's new Flash television series appears to be building towards revealing Professor Zoom, aka the Reverse Flash, as the show's chief antagonist (and murderer of Barry Allen's mother), perhaps the cinematic adaptation of "the Fastest Man Alive" will go in a different direction and use Captain Cold and/or the Rogues supervillain stable. However, Zoom is arguably Allen's greatest nemesis, responsible for a considerable amount of misery in the hero's life. There are a number of classic stories from the comics, such as the "Death of Iris Allen," the "Trial of the Flash," and Flashpoint, where Zoom is presented as Allen's chief villain. Even if DC/WB throws a major curve ball, and, in an effort to be different from the television series, builds their movie entirely around the second Flash, Wally West, there is still potential for Zoom. He was the chief villain in what is considered one of the greatest stories featuring Wally: Mark Waid's "The Return of Barry Allen." 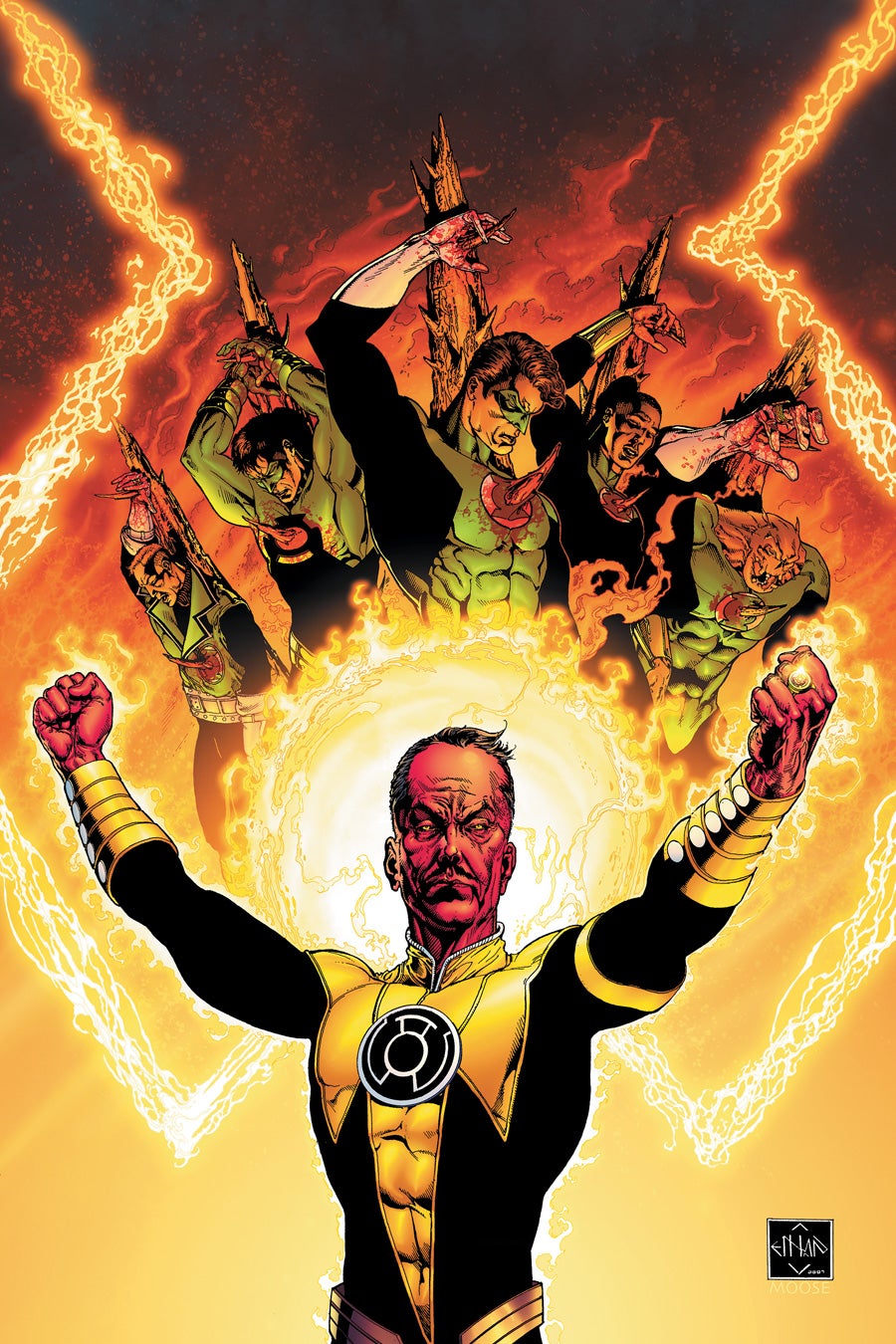 If not for the critical and commercial failure of 2011's Green Lantern, which prominently featured Sinestro (as played by Mark Strong), the villain's role in the (assumed) 2020 reboot would be a no-brainer. Sinestro, a former Green Lantern that is dishonorably discharged, is one of DC's most enduring villains and the arch-nemesis for what many consider to be the most recognizable Green Lantern, Hal Jordan. If the new film is a true reboot, it would feel quite odd for Sinestro not to factor into it somehow, either as an antagonist or a more in-between anti-hero, so it's probably best to assume that DC/WB will just pretend that 2011 never happened and start fresh. Unless … 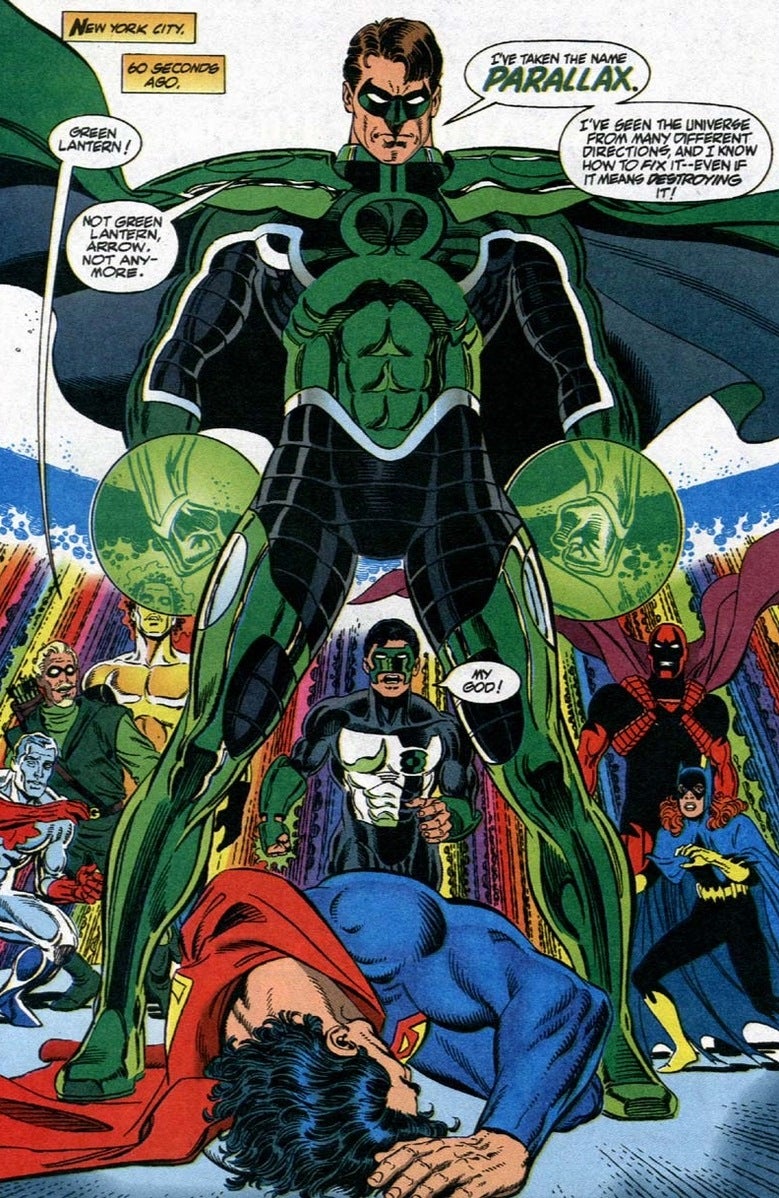 … Or DC/WB can do something unexpected and at some point over the next six years transform Hal Jordan into the supervillain Parallax (as we saw in the comics during the 1990s). It's not beyond the realm of possibility. Let's say DC/WB used Hal as part of their two Justice League movies in 2017 and 2019. As we saw in the "Emerald Twilight" storyline in the mid-90s, maybe something happens that personally impacts Hal, causing him to lose control of his emotions and powers. He goes crazy, kills a bunch of the guardians, transforming into Parallax. That sets the stage for 2020's Green Lantern to star Hal's successor, Kyle Rayner in a battle against Parallax (with assistance from the Justice League of course).

Maybe it's a stretch, but considering how some of these solo films are being released after the two Justice League movies (in contrast to how Marvel built up most of its heroes in solo films before teaming them in The Avengers), it's not beyond the realm of possibility for some of these later features like Green Lantern and Shazam to develop in an unexpected direction. 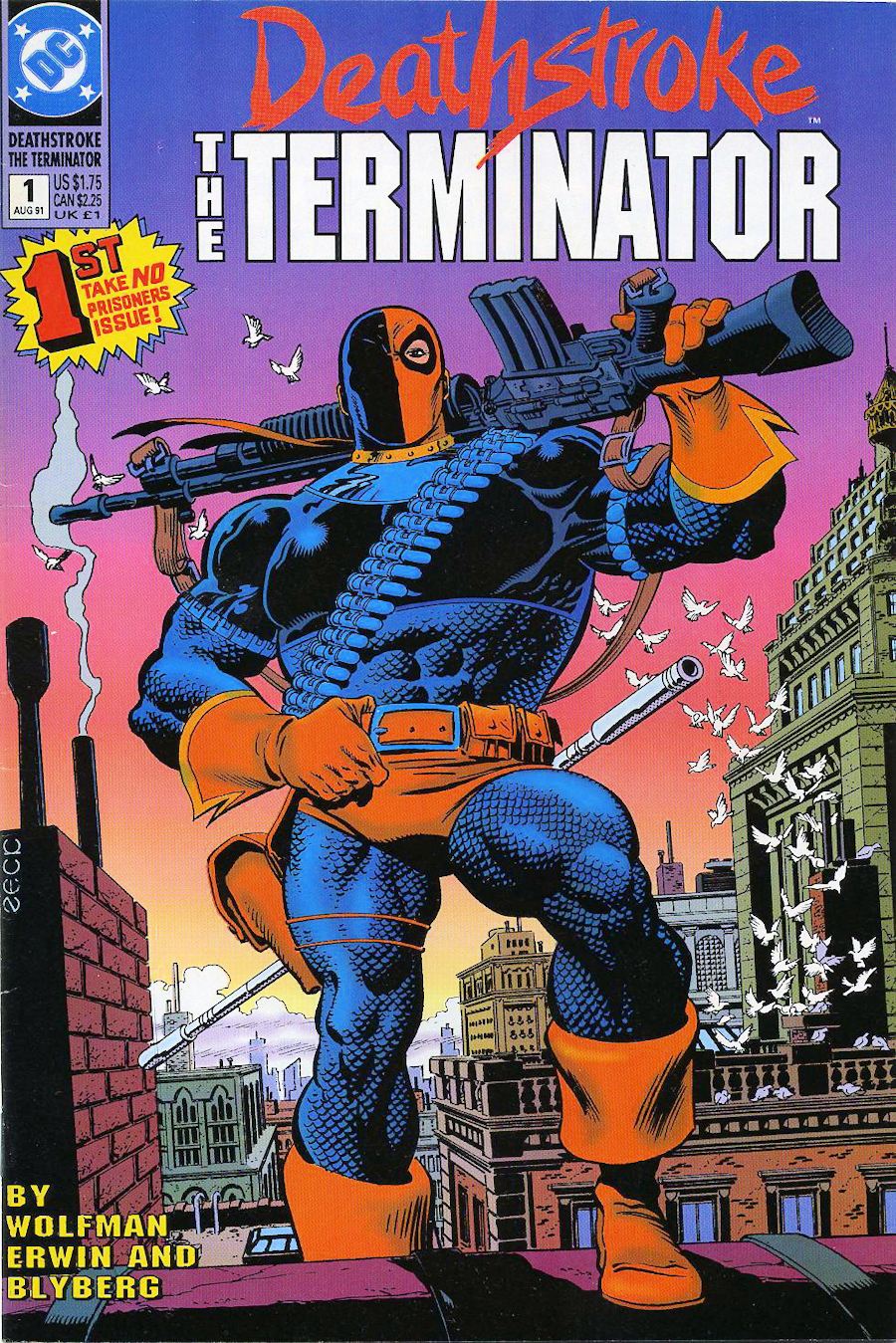 Not a Cyborg villain per se, Deathstroke, aka Slade Wilson, was created by Marv Wolfman and George Perez – the same team who created Cyborg – in the early 1980s as one of the chief antagonists for their ultra-popular The New Teen Titans series, the comic that popularized Cyborg. While there are some questions about whether or not any continuity from this series has been retained for DC's 2011 New 52 initiative, Deathstroke is still unquestionably one of the most popular villains in the greater DC rogue's gallery and warrants inclusion in the movie universe. If DC/WB decide against Cyborg/Deathstroke showdown, perhaps they'll want to recreate the Deathstroke/Justice League fight from the mid-2000s miniseries Identity Crisis. Some fans think Identity Crisis goes a little over the top in how strong and brilliant it casts Deathstroke, but watching the League working together to take down this master tactician is still a lot of fun and would probably translate well to film. 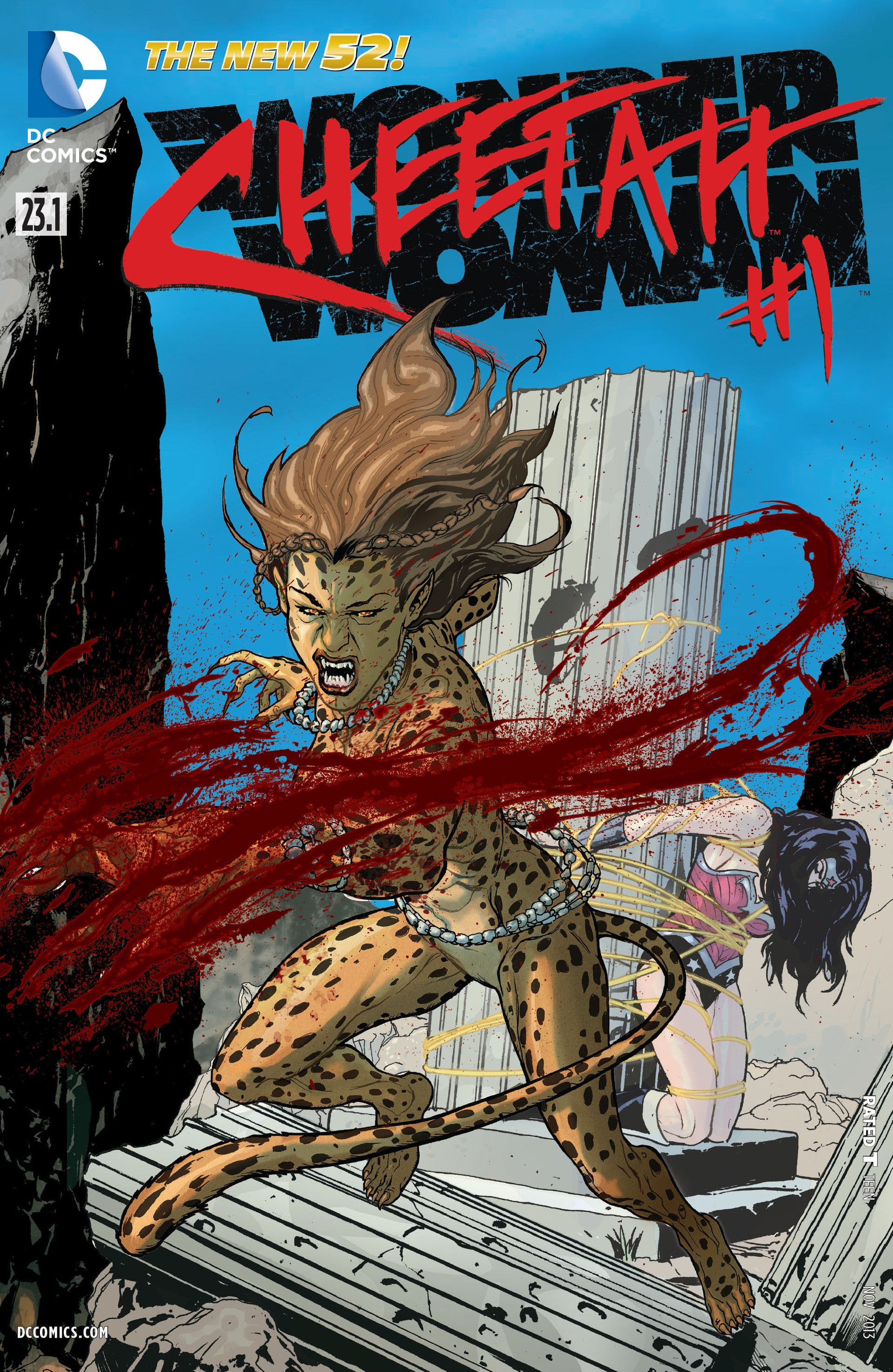 With DC already receiving accolades from comic book industry critics for beating Marvel to the punch by producing the first female-centric superhero film with 2017's Wonder Woman, why not double down and bring in one of the medium's great villainesses in Cheetah? Since her first appearance in 1943, Cheetah has been a thorn in Wonder Woman's side, despite the fact that she's been portrayed as four different women over the years. Currently, in DC's New 52 continuity, the role is being played by Dr. Barbara Minerva, who also portrayed Cheetah in the post-Crisis on the Infinite Earth continuity. With her tribal, Amazonian background, Cheetah will fit in perfectly with the mythological universe DC/WB is presumably building for its Wonder Woman film. And considering the character's previous run-ins with Superman and other members of the Justice League, she is a candidate to appear in future DC/WB films as the franchise moves along. 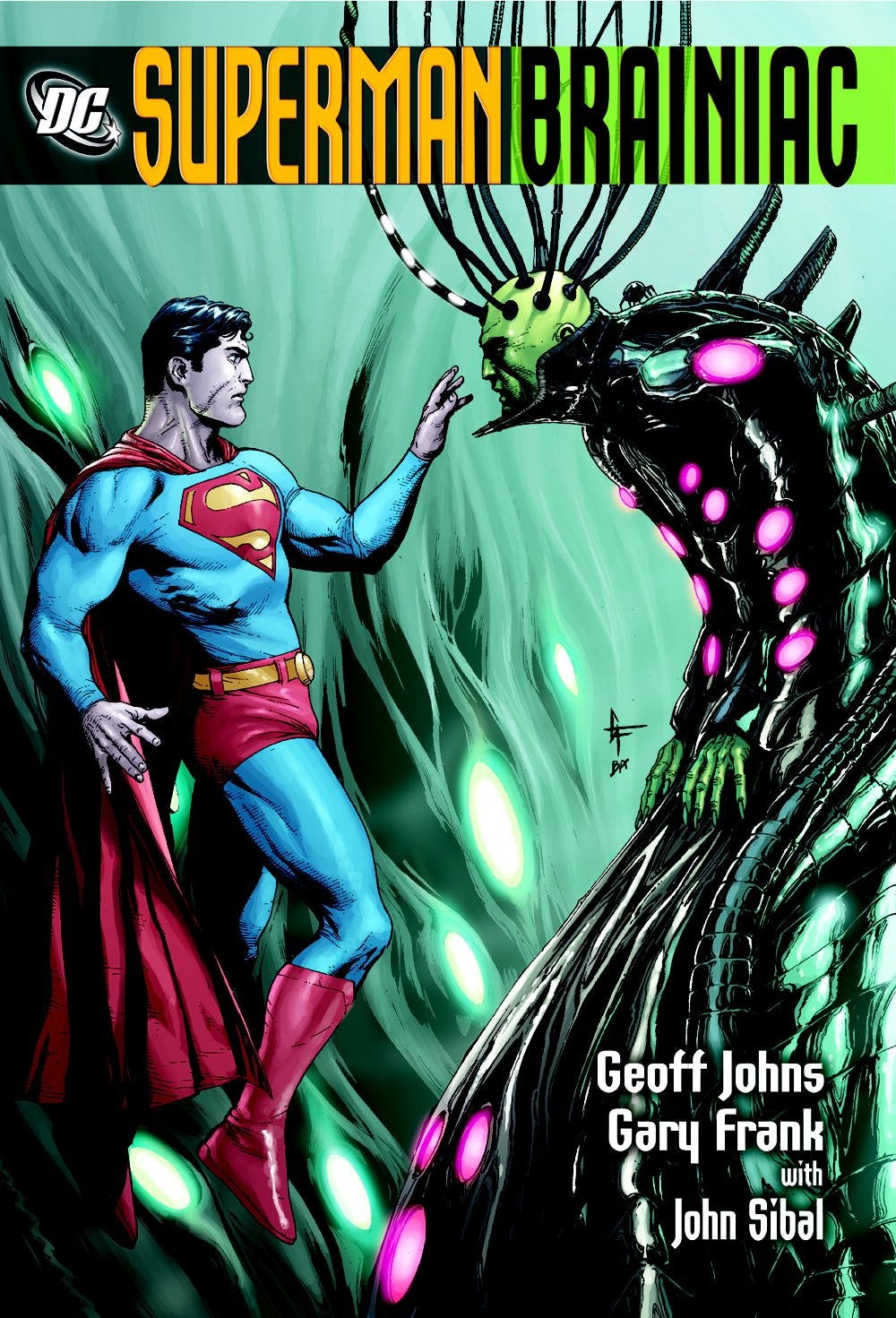 Many fans and critics are already under the belief that Brainiac, one of the great supervillains in the DC Universe, is expected to be the chief antagonist in Justice League, with some going as far as to speculatively casting an actor for the role (Benedict Cumberbatch). He was also reportedly in the running to be the featured villain in Man of Steel, with the nod eventually going to General Zod. That's not even taking into account all of the countless animated films and television features the character has been a part of for years.

So in short, it's difficult to argue against Brainiac's inclusion in a future DC film, and the first Justice League is as good of a place as any. It would make for a very compelling movie to watch DC's greatest heroes have to work together against someone with the superior intellect of Brainiac. It's to be assumed that upon their initial assemblage, the Justice League will not hit the ground running in terms of camaraderie, making a character like Brainiac, who can stay many steps ahead of anyone on their best day, the perfect nemesis. 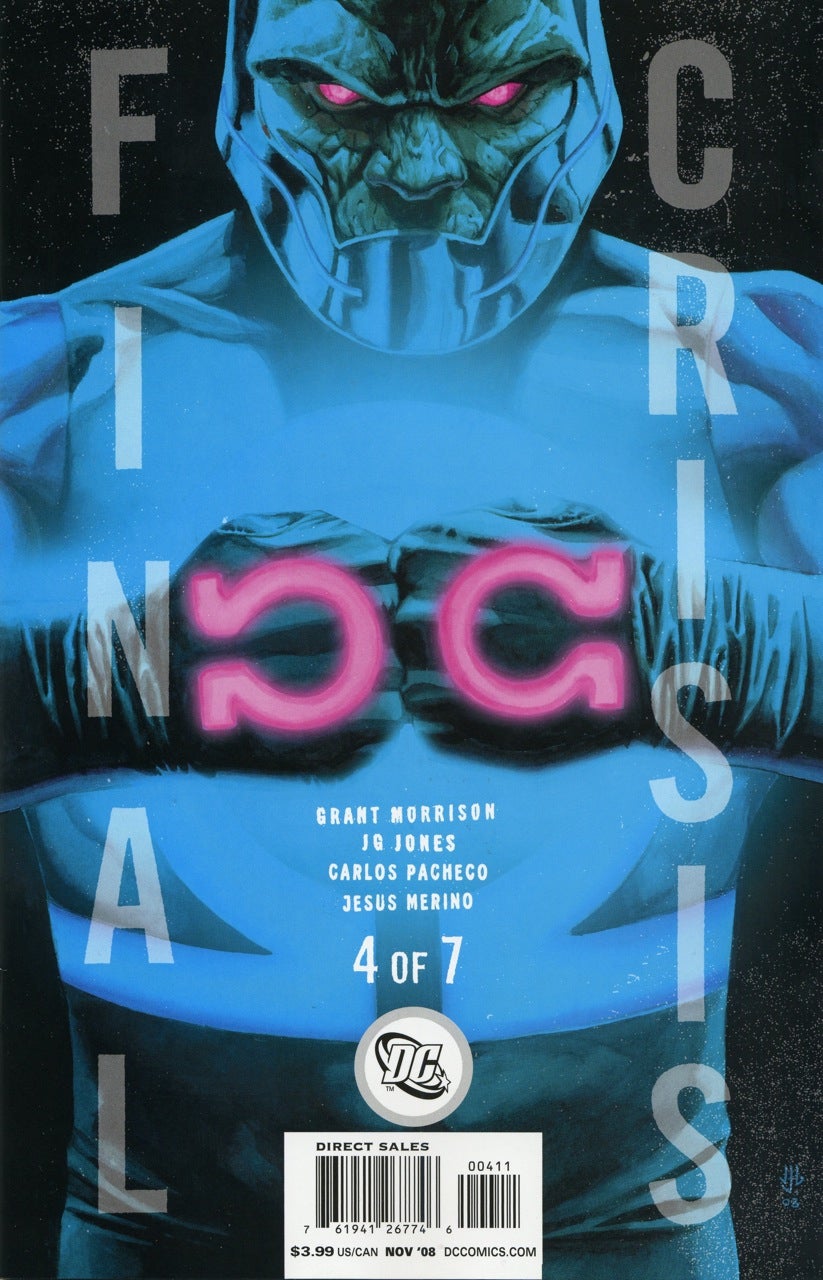 This Jack Kirby creation from his Fourth World epic is likely on the top of everyone's wish list for inclusion in a future DC film, and it's easy to see why. Darkseid (pronounced "dark-side," for the uninitiated) has been portrayed as the big bad in a number of iconic storylines such as the "Great Darkness Saga" in the Legion of Super-Heroes and Final Crisis. His combination of extreme strength, intellect, and burning desire to control the universe (via the anti-life equation), makes him a logical and compelling threat for either of the two Justice League movies. Additionally, in the New 52 reboot of the Justice League, Darkseid is presented as the very first villain the group faces, giving the production team some fairly recent source material to form a script from.