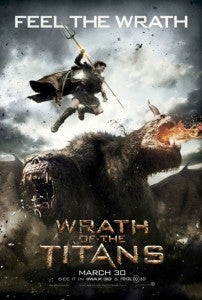 I'm calling it right now: this will be the biggest summer ever at the U.S. box office.  There are a ton of interesting looking blockbusters.  But let's not forget about Spring—especially the slate of GUY films that hits in March.  "John Carter," "The Hunger Games," and one that just got a new trailer today: "Wrath Of The Titans." A sequel to the box office smash 'Clash of the Titans' (the film took in $163 million in the U.S. and $500 million worldwide), 'Wrath' features many of the characters from the original film: Sam Worthington as Perseus, Liam Neeson as Zeus, and Ralph Fiennes has Hades.  Here's the new trailer. More after it:

Now that's what I'm talking about.  Monsters, fighting, and lots of just outstanding guy stuff.  The first film was not only overly entertaining, but it had a great story.  And it looks like 'Wrath' will be more of the same.  This time around, 10 years after defeating the Kraken, Perseus gets pulled from his now-quiet life into a battle between the gods and the Titans.  Zeus is captured, and Perseus sets out to rescue his father, as well as defeat the Titans. 'Wrath of the Titans' hits theaters March 30th.