Superhero stories are all about guys with a ton of power. You see Superman smashing up the street trying to take down Doomsday and the Green Lantern Corps inadvertently knocking planets off their axis while chasing The Anti-Monitor while The Fantastic Four literally reshape space and time until it's as flexible as Reed's neck. But every so often, you get a great moment that comes from a character with no powers at all. the fact that the character appears to be helpless in the context of these big, cosmic struggles. And often, these moments transcend the individual story. Here are a few memorable moments that came from guys with no powers at all, and the ways they were able to stand up to people they really, let's be honest, had no business being in a room with a lot of the time. 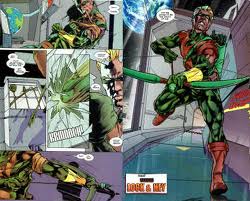 Connor Hawke saved the JLA and beat The Key with a boxing glove arrow (JLA #8) With the rest of the Justice League held hostage (and this was during the Morrison era, when "Justice League" meant something!), newly-minted Green Arrow Connor Hawke found himself wandering the cavernous Justice League satellite, disarmed by the League's own security and hoping to find a way to defend himself and save his fellow heroes. What does he come up with? Well, a little something from dear ol' dad. "Stay calm. Improvise. Handcuff Arrows. Net Arrows. Boxing Glove Arrows? Dad. Oh, dad. You're going to be the death of me." Kyle Rayner clubbed Parallax in the back of the head (Green Lantern #64) Apparently, Kyle missed the memo that it was Alan Scott whose weakness was wood in the pre-New 52 universe. In any event, Hal Jordan returned from the apparently-dead following the events of Zero Hour and found himself fighting with Kyle and the Justice League after he basically just strolled into town and demanded his Green Lantern ring back. After he rolled through the team and took the ring back from Kyle, Hal stood back and (in spite of saying the whole thing was about becoming Green Lantern again and retaking his sanity and his heroic place in the world) had his villain's soliloquy. With the League in tatters on the ground around him and Superman's mullet splayed out behind his unconscious head on the concrete, Hal was bested by-- --his conscience. Kyle clocked him with a plank of wood and gave him a speech, after which Hal just gave him the ring back and flew off. It's actually not nearly as anticlimactic as it sounds, and really gave fans who had up to that point been demanding that Kyle wasn't any good because he lacked willpower and relied too much on his imagination something to mull over.

Captain America stood up to Thanos (Infinity Gauntlet #4) In one of the most defining moments of Captain America's amazing career, the star-spangled Avenger faced down Thanos who, at the time, wielded the full power of the Infinity Gauntlet and all of its gems. What does a totally powerless, mortal man say to a god? That as long as living men resist his will and tyranny, he will never win. It's an inspiring moment that not only defines the story for casual fans but really gave Captain America to show what he was made of on a cosmic scale. 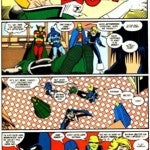 "One Punch" (Justice League #5) This one really needs no introduction; it's a moment so hilarious and iconic that not only has it been referenced countless times, but it was reproduced on Batman: The Brave and the Bold for a younger, TV audience to enjoy and it all over again. It was even referenced in one of the very final moments of the old DC Universe--in the last issue of Green Lantern Corps, Batman and Guy make a thinly-veiled reference to the event--in an issue that was released not only in the final week of the old DCU but in the same week as at least one other comic book (one of the DC Flashback books done by Ron Marz and drawn by Daryl Banks, the creative team behind the Green Lantern story above) wherein Kyle Rayner references it too! "I did it thirty-five minutes ago." (Watchmen #12) This is a pretty DC-heavy list, isn't it? I suppose that's because Marvel tends to have more human characters with more human foibles and often they don't end up way over their heads, which is what makes these moments so epic. In any event, this one's from a bad guy, ironically enough, but he thought he was doing the right thing--and it's an incredibly iconic moment--so we figured it counted. Did we miss any?

5 Epic Superhero Moments (By Guys With No Powers)