On this week's episode of Agents of S.H.I.E.L.D., Adrianne Palicki will portray Bobbi Morse, better known as her comic book alias Mockingbird. Morse is yet another high profile and recognizable character from the comics to appear on the show, following in the footsteps of Deathlok and Crusher Creel, further expanding the size and scope of the Marvel Cinematic Universe.

First introduced in Astonishing Tales #6 in 1971, Morse is best known for her stints with S.H.I.E.L.D. and the Avengers and was even married for a number of years to Clint Barton, aka, Hawkeye. Most recently, she was a regular cast member in the Marvel Now relaunch of the Secret Avengers – which was heavily focused on S.H.I.E.L.D.

For those looking to get some more background about Morse and her role in Marvel history, here are five essential comic book stories that could prove some potential insights into how the character might be used in Agents of S.H.I.E.L.D. and the larger cinematic/television universe going forward. 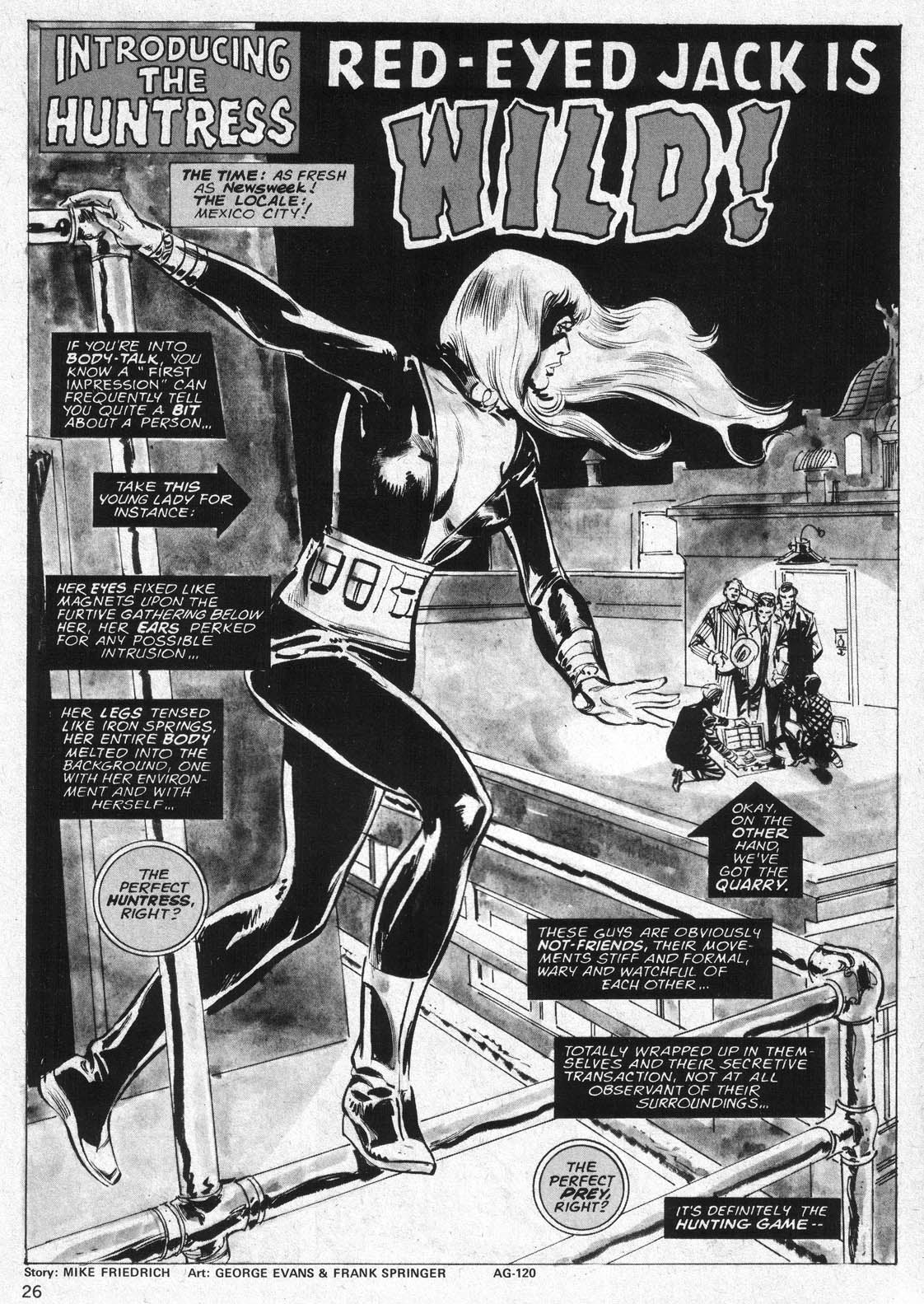 Bobbi Morse was first introduced in the Marvel Universe as S.H.I.E.L.D. Agent 19, a supporting character who appeared in a handful of Kazar stories as published in Astonishing Tales in the early 1970s. By 1976, the character started to resemble the superheroine we know today when she was the protagonist of the story, "Red-Eyed Jack is Wild!," a 20-page feature in the black-and-white one-off magazine Marvel Super Action. Here, Morse takes on the identity of the Huntress, a super spy and hand-to-hand combat specialist who is investigating possible corruption within S.H.I.E.L.D. after an agency lawyer is murdered in a court room explosion that is believed to be an "inside job."

On first blush, the Huntress might appear to be just another comic book femme fatale. But the story does an admirable job in demonstrating some of the character's charisma and nuance. She proves to be quite capable in a fight and rises above the usual "damsel in distress" scenarios to prove that Morse could have a long-term role in Marvel Comics beyond the jungle world of Kazar. Unfortunately, "Red-Eyed Jack is Wild!" ends on a somewhat ambiguous and inconclusive note – reportedly because her story was intended to be a two-parter but budget issues forced Marvel to publish only one issue of Super Action. 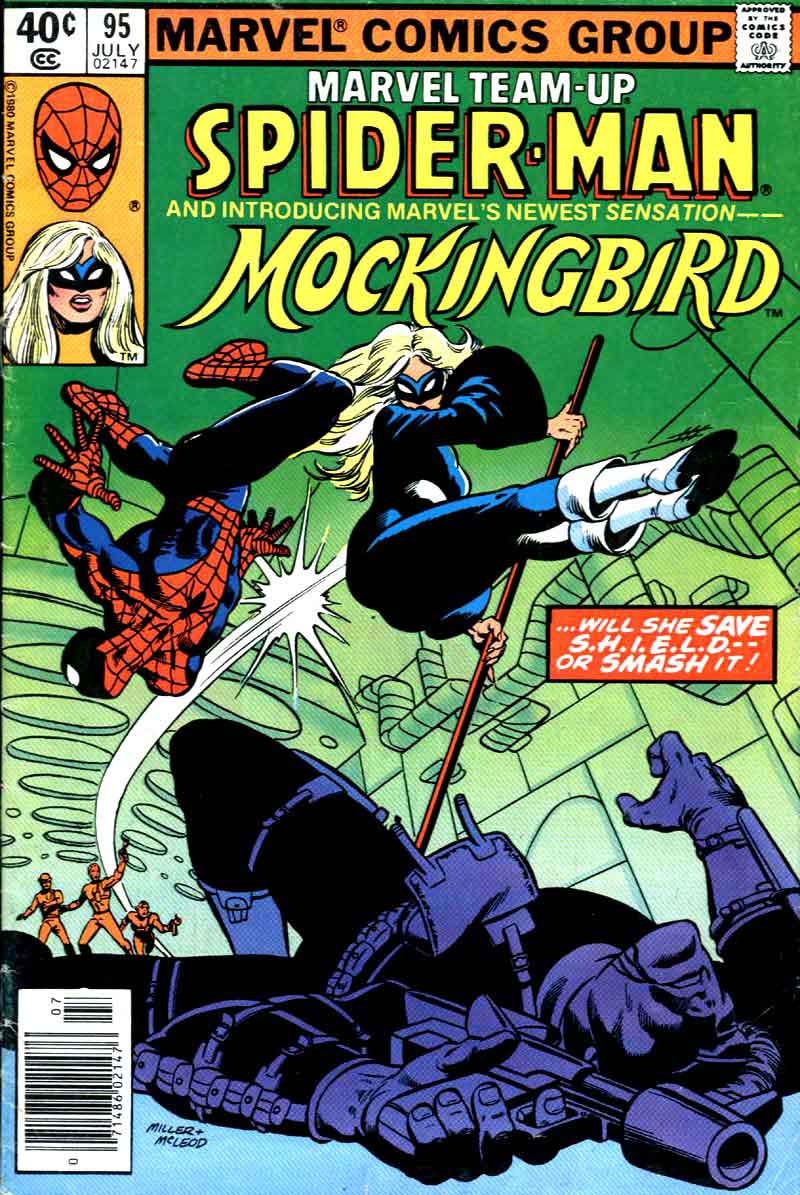 In what was a very common occurrence in Marvel Comics during the 1970s and early 80s, Morse's newest makeover as the heroine Mockingbird was first tested on readers in an issue of Marvel Team-Up – a comic series that traditionally paired off the perennially popular Spider-Man with another character in a one-off or two-part story.

Four years removed from her turn as the Huntress, the story, written by Steven Grant with art from Jimmy Janes and Bruce Patterson, definitely strives to provide a fresh coat of paint to Morse's character (it didn't hurt that DC had introduced a character named Huntress in the interim between Marvel Super Action and Marvel Team-Up #95). She's got a brand new costume and unveils what will become her signature batons-turned-bo sticks weapons. However, as was the case in her last appearance, Morse is still presented as morally ambiguous, and a potential enemy of Nick Fury and S.H.I.E.L.D. Spider-Man – no stranger to being a social outcast – is constantly straddling the fence between wanting to help Morse or bring her in to the proper authorities. However, Marvel Team-Up #95 does resolve any murkiness with Morse's character, setting the stage for Mockingbird to become a regular part of the Marvel Universe. 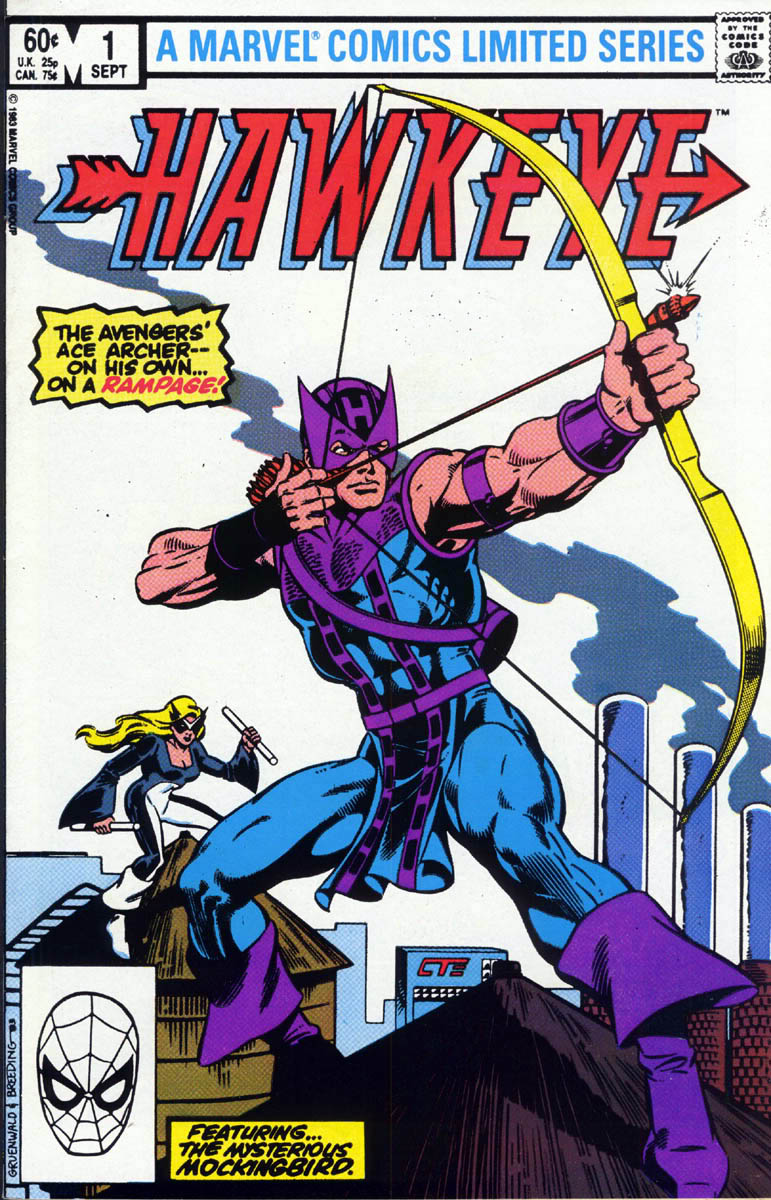 In what is probably recognized as Morse's most famous story, Mockingbird makes her comeback following her injury at the end of Marvel Team-Up #95, playing a critical role in Mark Gruenwald's Hawkeye miniseries in 1983. Together, Morse and Hawkeye  investigate possible corruption at a technology company where Hawkeye is working as head of security. Over the duration of the story, the reader learns about some of Morse's origins involving her role in S.H.I.E.L.D.

But the biggest bombshell to come out of this story is the surprise marriage between Hawkeye and Mockingbird during the closing pages of the mini's fourth and final issue. The nuptials instantly made Hawkeye and Mockingbird one of Marvel's premiere "power couples," as well as founding members of a new Avengers team that was being championed by iconic writer Roger Stern. Speaking of which … 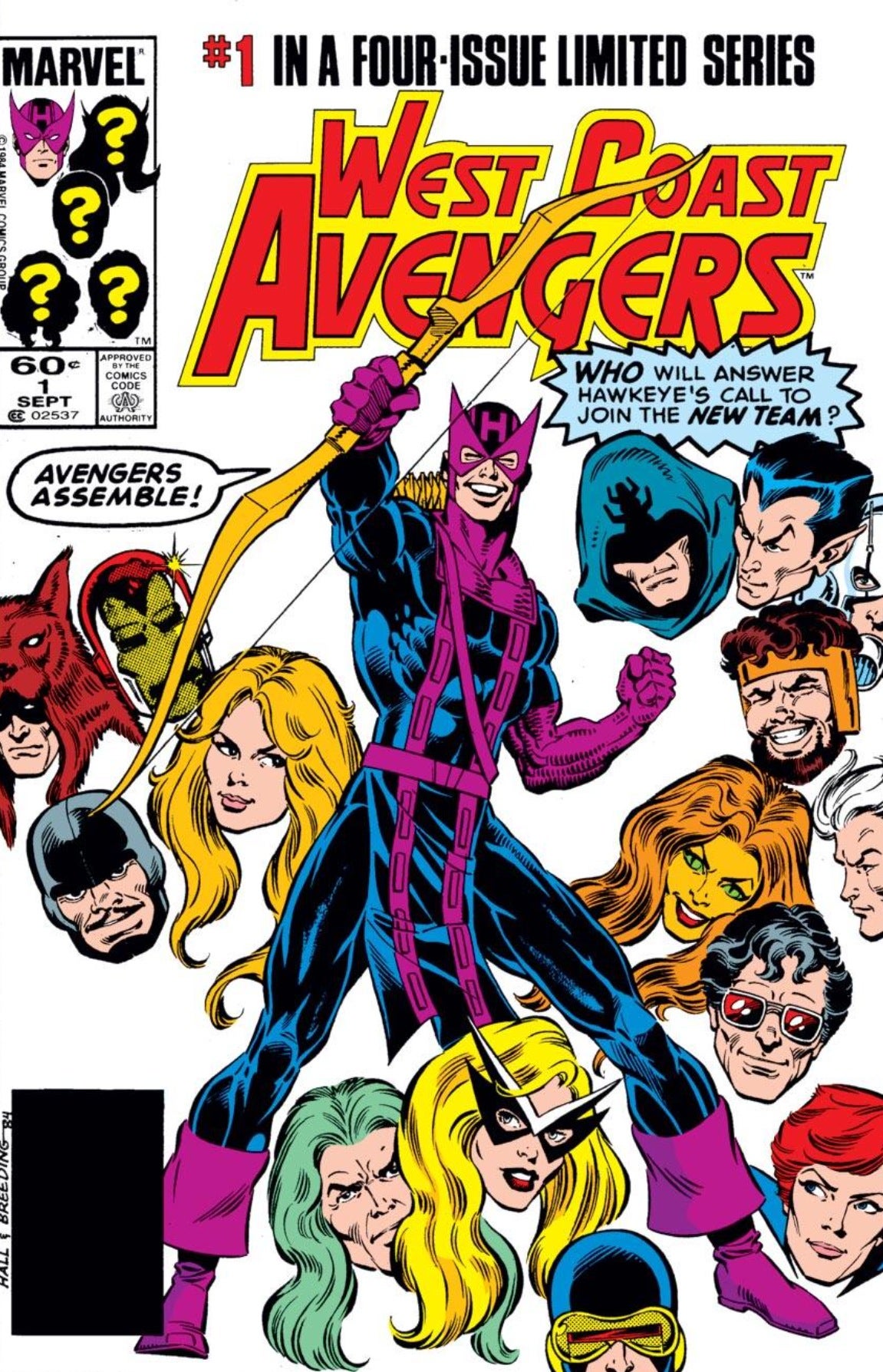 This 1984 miniseries from Stern and Bob Hall/Brett Breeding introduced a second batch of "Earth's Mightiest Heroes" that is set (as the title indicates) in California. The group is started by Hawkeye per the Vision's suggestion that the Avengers should expand their influence to better respond to catastrophic threats. Naturally, Hawkeye's first choice to join him on the team is his new wife Mockingbird.

The West Coast Avengers immediately find themselves in over their heads when faced with trying to take down the super powered villain, Gravitron. The heroes work together, utilizing all of their abilities to defeat Gravitron, but Mockingbird does play a key role in piloting Hawkeye's flight machine, allowing him to freely shoot some gas arrows towards the supervillain.

From there, Morse became a full-fledged Avenger, and would play an even more prominent role with the group when West Coast Avengers became its own ongoing series in the mid-1980s/early 90s (later renamed Avengers: West Coast). Within that series, Hawkeye and Mockingbird's relationship was a central plot point, and often faced numerous obstacles and challenges. 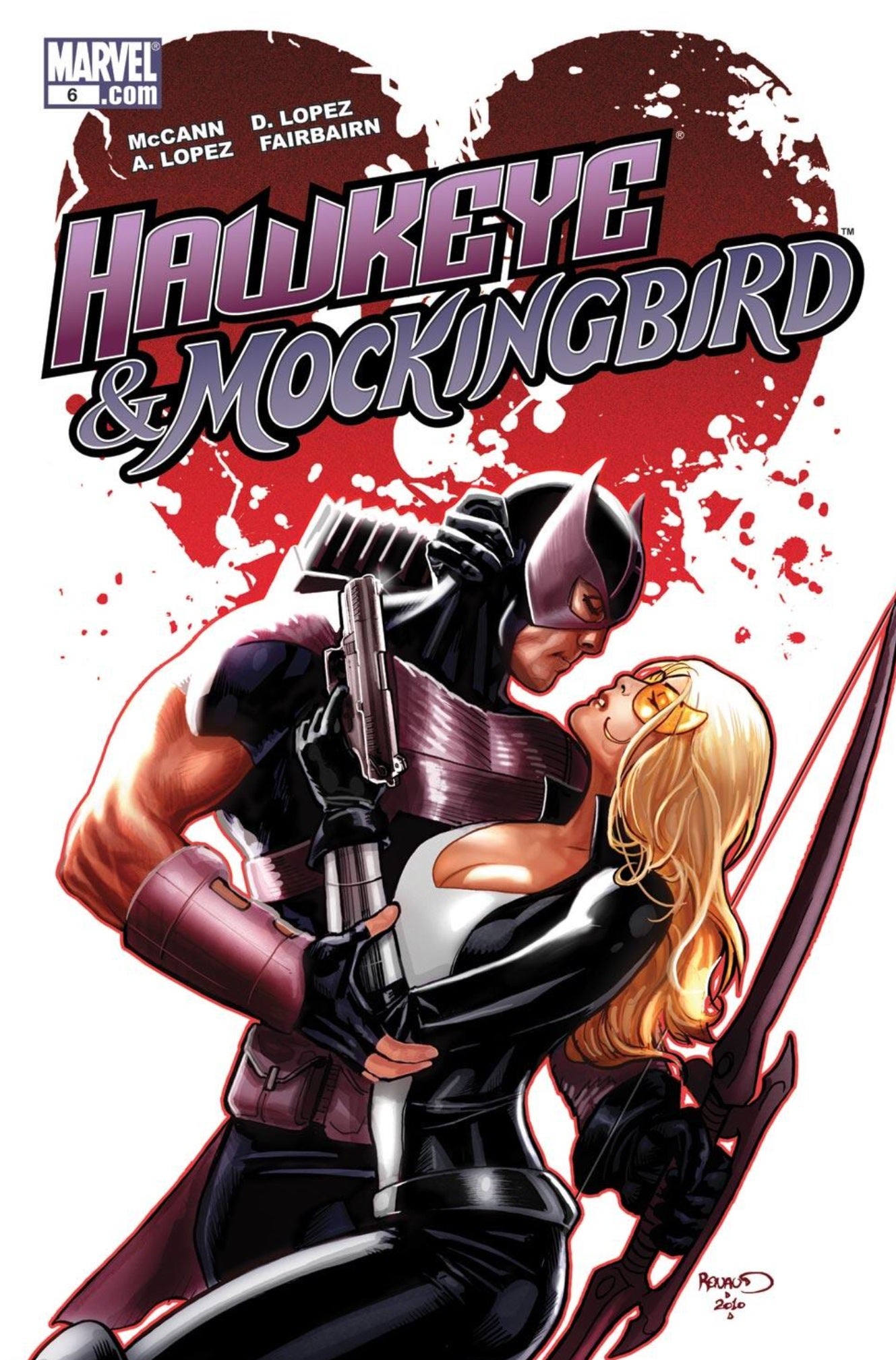 Spinning out of 2009's New Avengers: Reunion miniseries, which saw Mockingbird's return to the Marvel Universe after she was believed to be dead, the company launched the Hawkeye & Mockingbird ongoing in 2010, which was scripted Jim McCann with art from David Lopez and Alvaro Lopez. The premise of the book was to demonstrate the evolution of Hawkeye and Mockingbird as characters – especially given Morse's long-absence. Naturally, the respective growths of both characters while separated from each other pays off with Hawkeye and Mockingbird learning that they are two entirely different people from when they were married/romantically involved, thus leading to the dissolution of their romance.

The short-lived series, which only lasted six issues before it spun-off into the Widowmaker four-part limited series, also revists a lot of old storylines involving Hawkeye and Mockingbird, including the return of Crossfire, the villain they fought in the original Hawkeye miniseries, and a new iteration of the Phantom Rider – a character that Morse has had a tortured history with during Avengers: West Coast.

Hawkeye & Mockingbird was generally well received while it was being published, and is a good demonstration of how Morse currently views Morse as a character in terms of her qualities and attributes. Following this series, Mockingbird has been appearing in Marvel Now's Secret Avengers reboot.